Now, here's a film with a one-track mind: uzumaki, the spiral, the line that goes round and round and round and round until we all transform in suicidal madmen or slimy snails. It's a pattern in nature, but also a pattern in the noblest of arts: pottery. It attracts the eye and drags it, along with its proprietor, into the nether realms of human thoughts. It may be a bait used by a Snake God or a curse that befell a small town and its wholesome inhabitants. We are not sure, but then, how can we be? We are already knee-deep in the whirlpool that is Uzumaki! 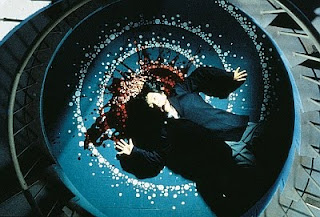 Have you ever stared at a snail shell or at the water flushing down the toilet, wondering how a perfect shape as the spiral came to be? Do you love pottery, but can't determine why? Do you feel the urge to drink liters and liters of water to quench that bothersome, bulging excrescence in your back? If you answered 'yes' to any of those questions, I'm sure Uzumaki will mesmerize you. But beware! It might also make you want to slice the tip of your fingers off. OK. Enough jokes. It's just that Uzumaki is such a manic, fun-loving and unpretentious little film that it puts a vacuous smile on your face and makes you wanna go CRAZY! It's a gimmick film, sure, but one that takes it all the way, right up to the extravagant finale. But most of all, it is a savvy and original project which benefits from both the Japanese's technical savoir-faire (particularly in terms of framing and composition) and their love for the weird and hypnotic.

The pretitle scene features a nice variation, a twist if you will, on the classic Hitchcockian "spiral" tracking. Starting with a close-up on a splattered corpse, and using fading graphic matches, the camera manages to ascend an entire spiral staircase while keeping the corpse in a spiralling frame. With such a clever, dizzying opening, we immediately know that the uzumaki gimmick is for real. This is confirmed by an early scene in which high school protagonist Kirie is "surprised" by a nerdy suitor framed laterally, then upside down. And that's not mentioning other such technical uzumakis as the irises on molding clay. Of course, the scenery is also peppered with spirals such as clouds, smoke, snails, pasta, 6s and 9s, which sometimes feel contrived. A bit like easter eggs scattered about for viewers to yell: "Hey, look! Another uzumaki right over there!" I guess that's also part of the fun, especially for Where is Waldo? fans... At any rate, it's great to see such a viral gimmick investing all aspects of the film in an attempt to entrap us as well as the characters. 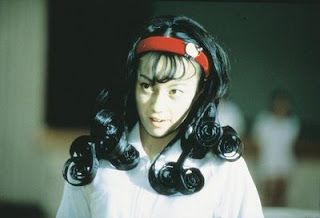 Based on the eponymous manga by Junji Ito, Uzumaki is the story of "a strangeness" that befell a small town. It's the word used by protagonist Kirie Goshima in an attempt to resume the diegetic events: "strangeness". Early on, she catches her friend Shuichi's father manically videotaping snail shells. When she mentions this to the young man, his face becomes stern. "Maybe it wasn't him..." says Kirie to humor him. "It was him", he replies. Then he suggests he and Kirie should elope before they get caught in the uzumaki curse. Hesitant and attached to her own father, Kirie stays put, despite increasing evidence of the curse. Shuichi's father gets madder and madder, obsessed with the uzumaki to the point where he commits ritualistic suicide (in a quite down-to-earth, but original way). Students start transforming into snails, sluggishly making their way across the classroom and spewing goo around. Shuichi's mother gets crazy, as well as Kirie's father. Everything is absorbed in the titular vortex.

Convenient title, Uzumaki, because of all its connotations. But when applied as a narrative and symbolic pattern, it works surprisingly well. But most important of all, it's fun! Almost hypnotic... It's fun to watch all the weird little events that make up the story, and eventually witness the whole gamut of spirals, which we find in increasingly incongruous places as the pace picks up. In the twirling of eyes in their sockets, in bodies wrapped around car tires, and worst of all... in millipedes. God I hate millipedes, especially when... well, you'll see if you rent the film. Uzumaki keeps us excited with tentalizing chapter titles and the promise of increasing weirdness, thus, of increasingly elaborate special effects. In the end, it works exceptionally well, thanks in most part to the solid direction which keeps those special effects in check and to the lack of any contrived explanation that would lessen the mystery surrounding the hypnotic spiral. Actually, the "hero" reporter character, which does feel contrived, dies while bringing his findings to Kirie and Shuichi, leaving us with only scraps of information gathered from a short montage of him in the library. It's possible to "make sense" of what happens, if you care to do so, but the story works equally well as that of the uzumaki curse. Plain and simple. A vortex that swallows all in its intricate design.

Posted by Le cinécurieux at 7:08 AM