Hellraiser is Clive Barker's adaptation of his own novella, The Hellbound Heart. In the transfer, he has tacked-on a more "filmic" ending and awarded Kirsty a much greater role. Of course, I was happy to see the young woman (played by gorgeous 21-years-old American actress Ashley Laurence) get as much screen time as possible. On the other hand, I was not totally convinced by her dream scene (which adds nothing to the plot but a dubious hint of ESP) and her under-developed romance with some bland boy whose name I don't even remember (a relationship that adds nothing to the plot either). To be perfectly honest, I felt that all elements extraneous to the novella seemed contrived, even unwanted by Barker himself. Still, the film unveiled him as a competent director who can successfully translate words into cinematic expressions. 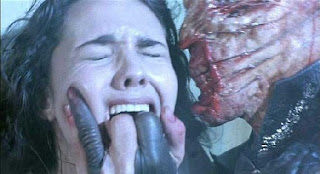 The scenario is almost Shakespearian in nature. It features the fratricidal relationship between evil Frank, good Larry and Julia, the bitch queen inbetween. You see, Frank is an explorer of extreme pleasures. Bored with sex and drugs, he summoned the "Cenobites", sado-masochistic demons from Hell who offered him the ultimate S&M experience (which obviously killed him). When brother Larry and second wife Julia (Frank's one-time lover) move in the now-abandoned family mansion, they revive Frank by spilling blood on the spot where he died. But the resurrected Frank is incomplete. He needs blood in order to recover his flesh and skin. Using a promise she made in the throes of ecstasy, Frank manipulates Julia into bringing him unsuspecting victims, namely lonely men she lures home with the promise of sex. There's only one small dent in their plan: Larry's daughter, Kirsty. Once she learns of their murderous doings, she strikes a deal with the Cenobites: Frank's life in exchange of her own. In the end, everybody's dead but beautiful Kirsty and her bland boyfriend.

The film benefits mostly from a haunting score, Barker's masterful adaptation of the source material into a concise, suspenseful cinematic experience and from some incredible special effects that move this classic tale of horror into the realm of the grotesque. The back story is superbly integrated to the ongoing plot (a case in point: the breathtaking cross-cut sequence involving both Julia's flashbacks of Frank and Larry's inevitable accident with the protruding nail) while the huge set full of stairs allows for some great, dramatic camera movements. Rhythmically, the film is excellent. It also features some of the greatest horror FX of the day, used with tremendous effect to showcase Frank's transformation. In my book, the scene where he rises from under the floorboards is one of the greatest in all of horror cinema. It is gooey, well-framed, well-edited, well-animated, and freaky as hell! Personally, I think this scene alone is worth the price of the best-quality DVD available. 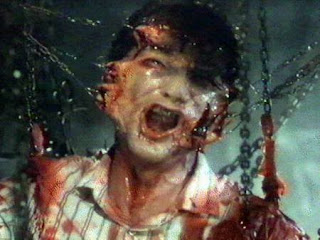 Unfortunately, the film also features some lame, contrived add-ons to the original story which only mares the radical efficiency of the film. The 'engineer' character, for example, seems to have been tacked-on only to prove the proficiency of the FX crew. But its presence is irrelevant to the story, even annoying. Its morphology is interesting, in a purely graphic way, but it makes the creature non-functional. Seeing it "hover" above the ground and flailing its arms to no avail, we almost feel sorry for it. Its presence in the final scene is more than underwhelming since it seems incapable of interacting with human actors. In fact, the entire scene following Frank's demise is laughable. This sequence is superfluous, clichéd and unwelcome. It even transforms the grotesque Cenobites into token 'bad guys'. And this line by Pinhead (then called "Lead Cenobite"), this pathetic: "Don't do that!". Ouff...

Now, that's another thing: the Cenobites are freaky, yet they are almost criminally under-developed. Sure, their suits and makeup are memorable, but they lack a real onscreen presence. They only spurt "cool" one-liners that fail to really flesh out their characters. It's as if they were intentionally designed as camp objects! To me, the real pop icon here is Gary Turncliffe, the guy who designed Pinhead, and not Doug Bradley who merely chews through his lines. After all, it is Giger we worship for creating Alien, not Bolaji Badejo, the Nigerian titan (7'2'') who donned the costume.

3,5/5 The film comes short of greatness only because of the superfluous elements tacked-on to this otherwise great horror story.

Posted by Le cinécurieux at 6:52 AM