Fukui's first feature film is this confusing, hyper-kinetic account of an android's martyr. When cyber-prostitute Pinocchio 964 is thrown out in the street for impotency, he wanders into the arms of Himiko, an amnesic young woman who takes him under her wing. She offers him shelter and food, tries to teach him to speak and helps stimulate his memory. Unfortuantely, she also shares her bed with the strange character (at least that's what we're entitled to think after a freeze-frame of their tongues intertwined fades to black). This encounter seems to poison her as she starts to stagger and puke frantically (in what is perhaps the lenghtiest vomiting scene in film history!) Ill and angry, she takes it all out on Pinocchio, torturing the poor, screaming android quite nastily, and eventually selling him to the headhunters sent by his creator. The ending is pure Japanese pulp as Pinocchio and Himiko "merge" together through inflated-head-transplant. 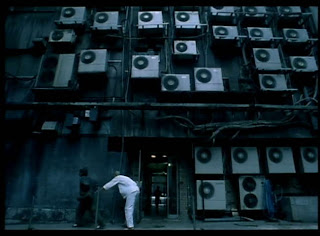 First of all, let me just say this: if you do not fancy Japanese genre cinema, steer clear of this one altogether. It is an assault on the senses that's even nastier than 24, but without any hint of a clear, well-defined storyline. It is shot with an hyper-active hand-held camera that clings to the characters as they frantically run through the city (which they do for a large part of the film). Badly-lit, badly-framed and agressively edited, watching it is more of a (very unpleasant) sensual experience than an intellectual one. Add to that a noise/scream-heavy soundtrack, and you're right inside the demented Japanese psyche. And it works, if you're willing to go along and risk a seizure. The labyrinthine and confusing nature of Tokyo streets is perfectly captured by Fukui, including its large, anonymous crowds completely oblivious to the protagonists. It is a city where the individual is dwarfed (check out photo #2) and regimented in its movements (thus the numerous shots taken inside public transit systems). What we learn from Fukui's film is the expressive potential of the body, and of art, in the face of a more "functional" humanity. The screams, the running, the puke, the blood, the pain, the hatred, the contempt and the anger, as well as the unrestrained expression of art are all indicators of a basic humanity claimed by cyberpunk in the face of an increasingly sanitized and impersonal system of social exchanges. It is the city vs. the individual. And thus, it is a block of ciment that Pinocchio carries instead of a cross.