The link with the Hellraiser series is flimsy in this formulaic psychological thriller with shy film noir undertones. Pinhead is here, the Cenobites are here (four of them, including the awesome new Wire Twins and a truncated version of Chatterer) and so is the Box. But they are merely subservient props to the story of a man and his own personal Hell. Although uptight and moralistic, this fourth sequel scores points for bringing new blood to the series (and taking anti-freeze out) while succesfully managing its own complex, if somewhat boring plot. At the risk of being crucified by leather-clad Pinhead fans with hammers and nails in hand, I will say this is actually the best Hellraiser sequel to date. 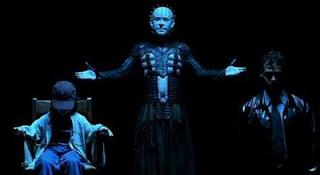 Baby-faced detective Thorne (the pun is positively intended) is actually an adulterous and drug-addicted sinner who enjoys stealing from crime scenes, beating up snitches and poking coked-up prostitutes in sleazy motel rooms. During one of his nightscapades, he accidentally solves the Puzzle Box (stolen during an ongoing investigation), and is sent spiralling in an introspective journey at the heart of "the Hell he has created", that is the result of his sinful ways. He first encounters the seductive Wire Twin Cenobites with whom he shares a strangely enticing, sado-masochistic embrace which grotesquely parodies his own pursuit of earthly delights. But soon, he is back in the real world. Or is it? A mysterious criminal dubbed "The Engineer" is killing people closer and closer to him until we start wondering if he is actually the killer. In the process, we discover how he has neglected his child, wife and parents in the pursuit of self-absorbed debauchery. Be sure not to blink because you might actually see a very tame Pinhead pop up and dispense his tired old wisdom.

Half-hidden behind this complex story of overlapping universes and amnesic candeur embroidered with flash-backs and oneiric set-ups lies a deep-rooted Christian moral about family values and purity that's pretty hard to swallow (especially for the thrill-seeking horror fan). It wouldn't be so bad if Craig Scheffer wasn't so unconvincing as the brooding Thorne, if his "evil" was less over-determined and his relationship with his family more developed. Then, perhaps, we might dig the necessity to have him tested and tried. Unfortunately, the whodunit mold and Scheffer's limited acting abilities are too restrictive to encompass all the psychological depth that the protagonist needed. Since the film focuses almost solely on Thorne, it eventually crumbles under the weight of its complexity because Scheffer's shoulders are not strong enough to support it. I happen to own Fangoria #198, which features an article on the "upcoming" Hellraiser: Inferno (horrible title, by the way). In it, we see some stills from the film, one of which features an incredibly stiff, emotionless Thorne attacked by his eyeless parents (his mother wielding a butcher knife). And the caption reads: "After the torments of the abyss, conventional weapons just don't seem as menacing". Now, it's very revealing of Scheffer's lame (if not plain unwilling) acting that the authors of Fangoria needed to interpret his lack of expression using some hypothetic trauma he might have suffered. It's a shame too because decent fuel could have actually taken this film somewhere... 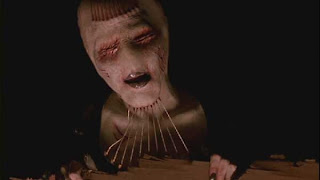 Director Derrickson and crew certainly didn't lack ambition, or guts. They took a flawed series with a nonetheless solid, grassroot fanbase and have tweaked it beyond recognition, making this popular but dying story their own in trying to resuscitate it. What first appears to be a case of Season of the Witch-itis (in which a generic genre film is transplanted into a series for higher revenues) really isn't. It's actually an honest (and pretty successful) attempt at using the basic codes of the series in a novel, more meaningful way. Just like many fans, I also felt that showcasing Pinhead alone on the box art was false advertising, but hey, it's just a marketing scam! Get over it! And besides, the series is actually much better with less of those one-dimensional geeks, the Cenobites. The new Cenobites may be less hardcore, sure, but they're used more parsimoniously and more intelligently. In fact, the Wire Twins are by far the most interesting Cenobites in the entire series, not because of their look, but because of their representation onscreen. They surround Thorne and lasciviously fondle him, slipping their slender fingers under his flesh while licking his face with their serpentine black tongues. It's just great! No fucking one-liner, lame pun about "dates from Hell" or any shit like that, just a grotesque and frankly enticing parody of sensuality the likes of which we had yet to see in the series! I mean, hadn't you ever wondered why all the Cenobites ever did in the previous Hellraiser films was just standing there and talking tough, never actually torturing anybody onscreen? Sure, there was the occasional hook, or saw, driven by Pinhead's telekinesis, hardly something sensual, as promised by the ample lore concerning the forbidden "pleasures of Hell". Now I wouldn't go as far as saying that Inferno fixes all the representational problems associated with the Cenobites, but at least, it approaches the question in a more level-headed and relevant way.

Hence, the figure of Pinhead is also transformed, from wisecracking boogeyman to spiritual guide. In his blog entry for the film (from which I took picture #1), religious author Ron Reed had this to say: "Pinhead fans were unhappy that the monster-geek "star" of the franchise has less than three minutes screen time, and that Derrickson moves things in something of a detective thriller direction, but other viewers may appreciate his efforts to make a more psychologically and spiritually significant silk purse out of a slasher movie sow's ear." Eulogistic metaphors aside, this is a sound commentary that pretty well sums up the double bind in which the film is caught up and cleverly "enlighten" us about its merits. Personnally, I did not miss Pinhead, only the haunting theme song by Christopher Young, which has been replaced by underwhelming syrup.

Despite some slight abuses of atmospheric music and some excesses of style, the film is competently made and slickly produced. The detective story is well-laid, well-paced and involving despite being derivative and predictable. It features campy little voice-over lines inspired by noir cinema that are quite relevant to the "fallen detective" framework. And it merges surprisingly well with the dramatic and supernatural elements thrown in the mix. Despite heterogeneous influences, the film works as a whole without cracking too much on the sides. But eventually, as it is the case with most films of this ilk, it is mared by too many formulaic effects and plot devices, and an esoteric finale set in convenient "dream" settings. Fortunately, the film steers clear of the silly mythology of Hell clumsily established by the three previous sequels in which everything is either boring, dusty or campy.

2,5/5 A surprisingly good, no-nonsense entry in a moribund series.
Posted by Le cinécurieux at 12:31 PM