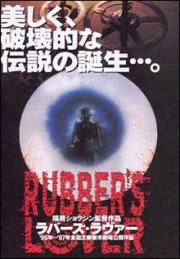 The tagline alone should be evocative enough to help you appraise this wild cyberpunk thriller : "Psychic power is achieved when mental anguish exceeds physical pain". If that opaque statement intrigues you in any way, I'm pretty sure you are curious enough to enjoy "Rubber's Lover", Shozin Fukui's sort-of-prequel to his seminal "Pinocchio 964" (1991). The premise is quite simple, but it is the execution that makes the film truly unique. Three doctors and a cute helper dressed as a maid, all of which are neurotic to varying degrees, conduct illegal experiments on psychic development using ether and some weird headgear called D.D.D. Unfortunately for them, they have yet failed to reap any results, and so their sponsor sends his secretary to shut them down. Hellbent on keeping the project alive, two of the three doctors go renegade, capturing their partner (an ether-junkie with psychic potential) as well as the (sexy) secretary, and using them in one last attempt "to achieve psychic power". In the end, they are both killed by their creation: a super-powered ether addict linked mentally to their sponsor's secretary, which then escapes into the city. Unfortunately, the last few frames constitute less of an adequate conclusion to this film than a flimsy link wih "Pinocchio". An artificial link since the two films differ in plot, themes and characters. In my opinion, the term "prequel" shouldn't even be used to caracterize "Rubber's Lover".

The film is shot in black-and-white using somber sets, making ample use of silhouettes to blur the distinction between the organic and the technological items in the scenery. The machines are framed in fetishistic close-ups as parts of one big, independant organism. They seem to have a life on their own. Human life, on the other hand, is what seeps from the body during the experiments: the blood and foam spurting from the mouths of tortured patients. It is their pain, their screams. The machines are tireless workers, while humans are the mere vessels of madness, greed and pain. And in the end, contrarily to say, "Tetsuo", the result of their unholy alliance is not a functional man-machine, but a weak drug addict, prisoner of his own tortured flesh. One shot in the film shows the demented Motomiya inventorying the different muscles in the human body as if it was nothing but the sum of its parts. As if it were a machine. But in the end, he returns to ashes, just as the simple man from the old Christian metaphor. His humanity is proven in death, as it is proven with fluids and screams. The film also features some enticing images of techno-fetish, which are sure to please the weirdly-oriented. Shimika in the rubber-suit, sporting the craziest headgear you've ever seen, could give Bianca Beauchamp a run for her money. But the scene where Akari and Kiku share a techno-orgasm while squirming around metal wires in an elevator takes the cake. It almost gave me a hard-on! This is the stuff you want to see: extreme, fetishistic images of machines, pain and pleasure, all weirdly intertwined in a cacophony of sounds and images driven by savvy rhytmic editing. This is what cyberpunk is all about! And although "Rubber's Lover" is slightly inferior to "Pinocchio 964", it constitutes quite a thrilling experience nonetheless.
3/5
Posted by Le cinécurieux at 8:29 AM