Here are some typical images of my childhood: 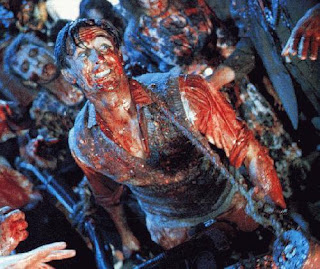 There was no girl with golden hair in my past, nor was there any legendary friendship. No empowering moment or first-time experience I could have benefited from... Only the sidewalk next to the convenience store and the endless discussions about what to do next, the large spit puddles from my cigarette-smoking friends and petty vandalism. Time was the fuel of my boredom, and God only knows how shamelessly I burnt it all. The story of my youth is one of a melancholy snail sliming through life, doing nothing but hope for something great to happen. Something. Anything. Clouds laced with fire or carnivorous plants suddenly springing upward, I didn’t care. I needed something to break the monotony of my suburban hometown and my autistic existence. As all kids of my kind, I even considered mass-murder a worthy solution to my ennui and pain.

The place I remember most vividly from my hometown is the video store on Brien street. The building seemed bigger than the whole town because it extanded way beyond its walls into the far reaches of the imagination. Inside were rows and rows and rows and rows of those weird, crankable boxes called "VHS tapes", each a key to my prison of flesh (that is, my diminutive body) and the bars of conventional ideas dispensed by parents and teachers, babysitters, and all form of adults who can’t understand the weight of worlds on a child’s soul. Now, this is the worst tragedy of youth: forced myopia. Again and again, children are taught to crank their universe back to fit the limitative frame of reality. Whatever exists beyond is forced into oblivion by adults. Hopelessness to reach the limits of my own realm: this is what I felt then, and still feel now. Fortunately, there is film.

As a kid, I strolled through the video store, contempling the myriad windows to other worlds. Better worlds. Worlds that went above and beyond our own. Worlds that ressembled it just enough to be plausible, but that differed so much as to make you forget the woes and melancholy sadness of youth. Hyperopic worlds, I call them, worlds built beyond the fuzz I saw as reality. No longer did I have to suffer through pain and boredom, because there was an escape. An escape of two hours worth a couple of bucks. From my viewpoint, it was worth it. Leaving a world of unfathomable sadness for wherever I wished. This was almost too much for a seven-year old to bear. The air was full of the intoxicating scent of popcorn, and the images were limitless in number. Everywhere you looked, there laid a reflecting pool wherein to step and vanish for a spell. Now, expectation is one of the most important part of the moviegoing experience. Expectation is a full-fledged prelude to any film. It is an excrescence of the whole that attaches automatically to its surface. As I desired every film in the video store, they all became alive, and started extruding their roots in all directions. I was overwhelmed. 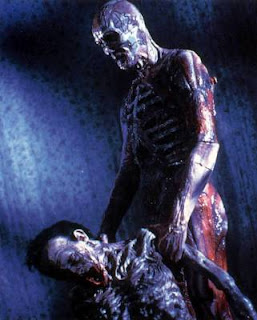 During my youth, I feared pain. I feared it so much that I didn’t even want to impose it on others. It was very late in my life that I found the capacity to hurt other human beings. Before that, I felt their pain as a projection on my own body, and it always prevented me from hitting. So I guess that horror did for me what it does for a vast portion of its spectators. It made unspeakable acts of torture... ok. Ok to watch and enjoy, and desire. I guess I was a sadist to begin with, but a sadist hampered by the physicality of his own body and that of others. I could not go beyond what I didn’t want done to me. You know : we’re told, and it’s not illogical at all, that you should not do to one what you don’t want done on you. But horror is the solution to this: it makes it acceptable to impose on your fellowman all the horror conceivable while still loving it. It constitutes an outlet for all the visceral impulses one is taught to keep hidden behind the many layers of civility.

The visceral, which I like to call “viscereal” for it is far more tangible by nature than spiritual and intellectual things, is also hampered by the social environnement. People don’t like to see blood, guts and puke, spit, snot and semen. What is inside must remain hidden while we cultivate the exterior to ridiculous extremes. We pamper ourselves to become artificially attractive, but we thus forget our humanity. We clean our living space with tremendous zeal, forgetting that men and bacterias are meant to cohabit. Most of all, we treat sickness, and particularly mental sickness, with all but the respect it deserves. The liberating experience of madness and delirium is regarded with contempt and disgust by people who truly can’t understand its nature. That is why horror and pornography are invaluable assets to our society: they show the last remainder of the real human experience in an intellectually-driven society.

This brings me to my next question. Which one is truly crazy: the man who wishes to witness the intringuing extremeties of pain, madness, fear and the grotesque lying beyond our everyday existences, or the man who lovingly spends his afternoon bowling for 150 and sitting on an orange plastic bench in an alley next to the freeway? Which one of them lives in the real world? I am saying this not to undermine the brave people who work hard all their lives and choose as a simple solution to their woes a life of quiet and anonymous consumerism. I am saying this to reevaluate the worth of “unclean” and unconventional urges. I am trying to situate our realities where they belong, as well as where they originate: in our hearts. That is where pain and horror often become unbearable, but that is also where limitless opportunities lie. 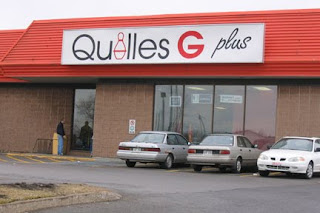 Herein, in this foreword, I wish not to discuss the legitimacy or the implications of war, genocide and other such planetary horrors. I do not wish to triviliaze their importance either. I am aware that there are undeniably real occurences of horror within the everyday of many unfortunate human beings, and all my love goes to them, for there is also love in horror. I herein speak from experience, and I limit myself to the truths of my own existence. Philosophizing is a privilege, as well as an obligation, in my opinion. There are pressing matters within the fabric of even the most insignificant suburban dweller’s life. Questions that go much deeper than the price of lawn fertilizer and snow shoveling services. Questions that flirt with the core of life in post-industrial America. "The Matrix", and "Ghost in the Shell" before it put it in eloquent images: we have chosen artifice as a way of life. That can be seen in the highly unnatural development of the suburb, and our total lack of interest for worldy affairs (in journalism, it is called, the law of proximity, and it stipulates that our interest radius weakens as we go outward from our home). The horror film, although it is generally considered as pure fantasy, is closer to the reality of the world, or at least, to the very real possibility of unspeakable violence that we have exorcised from our confortable lives.

From the beginning, I found the pain of horror movie victims extremely compelling. In the video store, I saw faces twisted in many unnatural ways, and limbs sawed off or chewed, all wondrous things to my juvenile mind, just from the stills on the boxes. Back then, I often wondered how humans could sustain so much pain. I also wondered about how the aforementioned occurrences came to be. I imagined a very sick mind responsible for them, a monster without morality or ethics, without realizing that this sick mind was actually a part of myself that existed despite all the efforts made to conceal it under the surface.

Somewhere between the constant pain I felt in my life, and my love for cinema, reality snapped, and it has never been quite the same since. I have found my place in this crazy and infinitely vast world of ours : rolled in a ball in some dark theater, millions of miles away from the flesh that has always contrived me to ridiculous extremes. That makes me quite uneasy to say, but that is the truth : I much prefer the disembodied experience of spectatorship to the control of the person I truly am, with all its limitations, social, physical, and magical. I prefer to be a guest in a foreign land than master in my home.

On the outside, I am docile, gentle and taciturn, truly a man with no spine. Being like this was the only way I found to make life livable, to be forgotten by people, whom I never found anything to share with. But inside, I am a furnace of conflicting emotions that find their way out of me only in uncontrolled bursts of anger and sadness directed solely at myself and random objects. I was always... shy about sharing feelings. Moreover, it’s not something people seem to do. People joke, they only joke and fool around because it is more comforting. Try to tackle an issue that transcends their daily lives, and they're gonna find some way to joke about it! Yet, if you punch them in the face, they will stop joking...

As a kid, I wondered why I craved horror, yet was also repelled by it. Was there a ray of hope shining over the beast I was? Or rather, was there a dark seed growing inside my otherwise healthy self? I always felt, and I still do, that there were two sides of me, much like Jekyll and Hyde. Now, that must be a feeling shared by most of you, but in my case, one is almost completely entraped in the other, and it cries for help. It cries for release, but I am too weak and afraid to let it out. I wish for the world to end, for death to start raining on unsuspecting populations. I want to kill with my bare hands, yet I lack the confidence to do it. So I watch horror films.