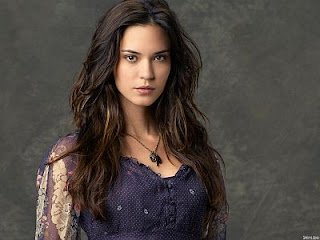 Yawn! I just woke up from watching The Unborn. And just like I did for The Stepfather, I decided to post this picture of the heroine so you won't need to watch the movie. Isn't she GORGEOUS? I mean.... ouff! Now, there were actually two reasons why I decided to watch The Unborn (other than the desire to review it): 1) Odette Yustman, whose Cuban/French/Italian heritage is the reason for her outstanding beauty, and 2) the strange fact that Maitland McDonagh (author of Broken Mirrors/Broken Minds: The Dark Dreams of Dario Argento) liked it, although I suspect that's because she and I share reason #1... All I can say is that I was pretty naive to believe that one beautiful face could redeem a film that was almost universally hated. But how bad was it really? Was watching it better or worse than staring at the picture above for 90 minutes? Er... Tough question. Let me just answer with a metaphor. If The Exorcist was a large piece of Black Forest cake (or tiramisu, whichever you prefer), then The Unborn would be a sodium-free rice cake. Get it?

The Unborn is not a Rosemary's Baby-type of story about a devil child, like I originally thought. It is more of a very anemic possession film that unconvincingly mixes Jewish mysticism and ghoulish apparitions straight out of J-horror. It features Yustman as Casey, a college girl (yes, you read that correctly: college) who is plagued by demonic apparitions from frame 1. In a dream, she envisions a ghoulish boy with bright blue eyes, a dog wearing a mask, and a fetus in formalin, all of which seem to be somehow related. Back to the real world, she is attacked by a young neighbor who smashes a mirror across her face. All of that during the first five minutes of the film! Unfortunately, the unrelenting pace drops when Casey starts delving deeper into the mystery, and the film turns into a tedious, contrived investigation of the supernatural, peppered here and there by the "scary" apparition of specters and bugs. As the story slowly crawls forward, thanks to a paper trail left by Casey's dead mother, we discover that her entire family is pursued by a possessing spirit called dybbuk hellbent on using their bodies as bridges to our world. I'll spare you the silly details, but let's just say that the story involves the whole gamut of convenient plot devices: newspaper clips and 8mm reels stashed neatly in the family basement, the Auschwitz Nazis, long-lost family members who pop up with crucial information, ancient tomes of arcane knowledge, a dead twin, a group of exorcism enthusiasts and a twist ending you will see coming from ten miles away.

In the end, The Unborn feels more like an horror-themed episode of Degrassi than a genuine horror film. Its convoluted and unconvincing explanation of possession slowly erodes the intriguing premise, relying too heavily on obscure revelations to forward the plot while a bunch of overdetermined images of supernatural entities scroll by unnoticed. You see, director David S. Goyer is more of a screenwriter than a director proper. If the floppy The Invisible (the remake of an eponymous Swedish film, which tanked at the box-office) and The Unborn are any indications, he totally lacks flair when it comes to framing, lighting and pacing a horror film. The result is a filmed story-board that wastes incredible creature effects with bland set-ups and uninvolving situations. And although the exorcism scene is nicely-paced, it does little to make up for the time spent getting there. As for Gary Oldman, whom we were all surprised to see on the cast list, he looks embarrassed all the way through, which is understandable considering the material he was involved with. In the end, experiencing the film is not really different from doing a Google search for Odette Yustman. Sitting on your couch, you will end up re-framing her face over and over again for your own personal movie until the screen goes black. Then you will stare at the box cover, oblivious to the "thrills" you are supposed to have experienced.

1,5/5: For having only fleeting images as assets.
Posted by Le cinécurieux at 3:24 PM