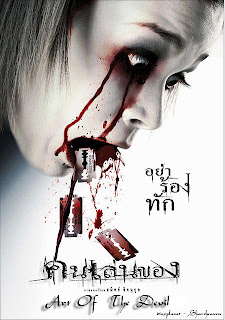 Don't be fooled by the cool artwork above; we all know that the only truly efficient razor-spitting scene is in Chinese gore-fu classic Riki-Oh (1991)! As for Art of the Devil, it is a lame Thai import that combines the savoir-faire of a student production with the vapid charm of a mainstream J-horror film. The result is a confused yawner that was generic and exploitative enough to spawn two (unrelated) sequels and, surprisingly enough, an American remake! The truth is that by tacking elements of Buddhist mysticism onto a sappy family drama and relying on cheap scare tactics to "pan-Asianize" it all, the makers of this film have created a bastard work that will please only the most underscriminating teenage crowds. As such, it fits perfectly alongside other Thai razzies such as Narok (2005, by the same director) and Shutter (2004), two films highly derivative of better, smarter Japanese films. At least, we get a lot of foxy Supakson Chaimongkol! In fact, I could very well recycle my closing argument about The Unborn and apply it to Art of the Devil since I felt about the same way watching both films (and their gorgeous, black-haired leading ladies). There is nothing else to watch! Except for a bunch of eels and a burning still-born, not even on par with the contorted specters of The Unborn...

Boom (Chaimongkol) is a very unlucky young woman. Knocked up by a rich family man, she squeezes one million baht (around 30,000 US$) out of him. But her ordeal isn't over because "for one million baht, she must be shared", that is raped by a boorish gang of company men under the watchful eye of the evil patriarch. Following further abuse, she finally decides to take revenge by offing anyone even remotely related to her torturers thanks to the black magic of an old barber. This radical change in her persona remains mostly unexplained until the very end, and even then, we hardly buy it. The film actually begins on Boom confining Nan, the very last descendant of the decadent patriarch, and exposing her to the dire truth about her father. Then, the narrative shifts back and forth between lenghty flash-backs shot in color (many of which are not even Boom's or Nan's) and snippets from this initial scene (shot in black and white). In the end, we even get a "climatic" fight on a hospital rooftop! 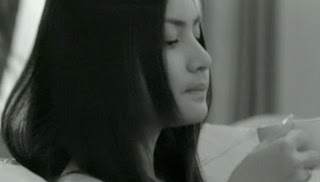 As I mentionned above, the sweet, angel-faced Boom is very unconvincing as the villainess, especially since her motivations are so hazy. During the entire film, I was wondering why this tear-eyed, pro-life little girl felt she had to kill kids and grandmas in grisly fashion for revenge on a bunch of middle-aged men. I guess her reasons only had to be dialogue-deep... In the end, I still sorta felt she was the victim in all this, because I couldn't buy the convenient shift in persona that had made her the demon she now was. Obviously, verisimilitude and even plausibility are not major concerns for director Jitnukul. And the narrative structure of the film doesn't help either. It's flash-back over flash-back with flash-backs of flash-backs (!) and annoying, superfluous ellipses. Most moronic of all are the "shocking" revelations peppered near the end to explain character traits that should've been exposed at the very beginning! Obviously, surprise may appear slicker, but it is actually much lazier and less effective than suspense (which the film completely lacks).

Now, that would be well and good if the horror sequences were more elaborate and the black magic lore more interesting. Because all we get on the horror front are snippets of gore, usually shot in the dark or in an annoying hyperkinetic fashion with these two words, "black magic", as sole explanation. Many of the scare scenes have little to no set-up, which makes you wonder why you should care at all about what you're seeing. There is a blatant abuse of suspenseful music used to artificially raise tension and excesses in style that barely mask the total ineptitude of the director. It gets better near the end, but by that time, your eyes are tiny, sleepy slits that can hardly make out the images onscreen.

Despite its ample budget and slick production values, Art of the Devil reeks of amateurism. There is an uncertainty (one could almost say shyness) in the direction and screenwriting departments which, although heartwarming, mares potentially decent material. Many scenes, mainly the "death" scenes, feature mixes of effects and camera angles so jumbled they appear to be straight out of a video clip, making you wonder if the filmmakers even knew what they were doing. Then, there is the unnecessarily loquacious scenario, full of budding sub-plots that never fully bloom, more of a showcase for sexy youths and cheap effects than an actual screenwriting effort. But strangest of all, there seems to be a self-devouring fear of true exploitation at the heart of it all, which makes the film a major tease that never really delivers. I mean, if you are gonna have pagan rituals involving eel-filled corpses and dried-up still-borns, why not show more of them than 5 seconds shots? If you're gonna have sex scenes, why not show more skin? And most of all, if you're gonna have a pivotal gang-rape scene, why not make it your bread and butter? I'm not asking for Irreversible-caliber stuff, just something nasty enough to warrant waves and waves of murders. At least a technical effort equivalent to that scene's narrative importance!

Like many teenage horror films, Art of the Devil grows out of lukewarm waters a limp and sad off-shoot fathered by producers out for quick bucks, but lacking the sadistic/artistic involvement and desire necessary to make a good film.

1,5/5 A slickly-produced but amateurish yawner.
Posted by Le cinécurieux at 3:15 PM