I actually expected worse from this hated video game adaptation by the dreaded Dr. Uwe Boll a.k.a. "The Master of Error". I expected total vacuity. What I found was silliness. Not campiness, but some kind of touching, heart-warming silliness from egomaniac Boll. Hell, here is a guy who made a 156-minutes Lord of the Rings-ripoff which he titled In the Name of the King: A Dungeon Siege Tale, and then complained that people didn't take his work seriously! House of the Dead doesn't have the pretension of such entreprises. Sure, it lacks humor and self-awareness, but at least it doesn't feature a sorry-looking Ray Liotta prancing around in a Matrix-inspired mage suit, hamming it up as a grade-F Saruman clone!

The plot of the film has very little to do with the game proper. It's just your run-of-the-mill drivel featuring a bunch of dumb-looking, dumb-sounding young people stuck on an island following a zombie-crashed rave party. All that they do there is basically to run around and shoot at their foes while sporadically dispensing lame one-liners, all the while being observed by a stitched-up character hiding in the bushes. What's truly unique with this film is not the contrived scenario or the special effects (which I must admit were okay), but Boll's naivety, which seeps through the celluloid and actually gives the film some well-needed energy. You see, I'm sure Mr. Boll was convinced he was making a great film. I'm sure he thought young Americans would find it cool, and start showing him some well-deserved respect. That would explain the blatant abuses of techno music and Matrix-inspired camera effects. And of course, the laughable inserts of in-game House of the Dead footage. 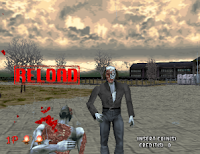 You read that correctly. The House of the Dead film is actually intercut with footage from the game. I don't know if it was an attempt at humor, some blatant publicity for Sega, or Boll's idea of filmmaking, but there it is. Some crudely-built, crudely-animated 1996 arcade zombies rush toward the screen in a bid for terror! But that's not all. The soundtrack is also a joke. It is part gangster-rap, part techno-dance (basically, all that is "cool") with some lame Prodigy imitators doing the intro. But what's really wrong with the soundtrack is that it features upbeat techno music during the fight scenes, paramount of which is the fight for the house. This one is straight out of The Matrix with the camera travelling around each character before he attacks. It has slow-motion and close-ups of shells splitting into buckshot, that is lots of cool stuff that would look just a bit over-the-top in the right context. But, hey! This isn't The Matrix you're doing here, Boll, this is a horror film! Ever heard of "atmosphere"? How about "mood"? No? Hell, I'm sure you know this one: "ill-advised"...

In the end, it all boils down to you, the viewer, to decide whether the film is worth a look. All I can say is that its most proeminent weaknesses, Boll's ill-advised directorial decisions, are also its greatest strenghts since they give the film some childish, zany energy. House of the Dead is not one of those "so bad it's good" films. It is rather a film so irrelevant that it becomes relevant to Boll's body of work. The thing is that the good German doesn't seem familiar with the term "adaptation" (strange for who guy who has a doctorate in litterature...). Instead of adapting the game into a film, he made his film into a game. So, if you want atmosphere, scares, tension, great gore and a strong plot, go to the local arcades, pick up a plastic gun and get ready! But if you want derivative drivel (with dumb-dumb action and tits), quickly grab a copy of Boll's film. I guarantee you there is one in every bargain bin of every video store across America.