OH MY GOD! How could they? How could anybody work on this thinking it was a worthy endeavor? This "Stepfather", an eponymous remake of the semi-classic 1987 thriller, could well be the blandest horror film I ever saw. Even "Carnosaur" and "Xtro" had their moments, but this here has no redeeming value whatsoever, save for Amber Heard (the pretty blonde star of the atrocious "All the Boys Love Mandy Lane"), but we'll get to that later.

The film starts on a middle-aged man changing his looks before leaving a house full of corpses. You see, he is actually a psycho-killer hellbent on wiping out families deemed inappropriate for his fathership. But we all know that, right? And we all know that he will go on pursuing his goals with yet another unsuspecting family. Which he does. First by smooth-talking a single mother in a grocery store, then by making friends with her kids and acquaintances. Simple enough. Too simple in fact. Stepfather then goes on to bump off everybody who gets in the way of his dream (to create the "perfect" family), including an elderly woman, a lesbian real estate agent, and his bride's ex-husband. As the kill count goes, that's it. And these kills are all dry. Throughout the film, the elder son fosters suspicions about daddy #2 which he sporadically shares with his girlfriend to the same effect everytime. "It's all in your head", she repeats even as evidences of foul play keep piling up. And so, the screenplay limps from scene to scene, all of which are way too familiar and forward the plot a quarter of an inch each time. When finally stepfather and his family battle it out, we're 90 minutes too far from the beginning of the film. Our interest, alive in the fifteen minutes or so, has waned into non-existence. There never was no suspense to keep us awake since we knew from frame 1 who the killer was. There is no narrative novelty either, not even a good plot twist, and the characters are all mere archetypes.

The best way to describe "Stepfather" is with the expression "by-the-book". Unfortunately, the "book" hasn't sold one copy since the 1980s. Back then, it was still relevant to make a movie about reconstructed families, a phenomenon that peeked during that decade, and partook in the lives of many young movie-goers (and targets for the horror market). But today? Such a subject would have required a radical modernization, which the drones responsible for its execution didn't think was important. They could just as well have pissed in the audience's face! Their film is a shameless rehash made for quick bucks, a malignant tumor in Hollywood's rotting brain. Since it is a virtual copy of the original, digging for inspiration in a lackluster, moribund sub-genre, there is no reason to see it. Except of course for Heard's body, which is featured proeminently. As fellow Canuck Arrow in the Head mentioned in his review, her character's wardrobe seem to contain nothing but bikinis and undies, which are the only items of clothes she wears throughout the film. Here is a picture of her, so that you can forget about the film altogether. Enjoy! 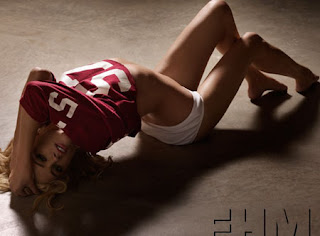