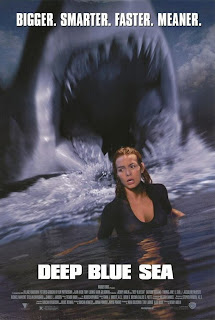 First of all, I must stress how terrible I think this poster is. Granted, the title is better than Killer Sharkz, White Terror or MegaJaws, but with a poster like this, you'd still think the film was a straight-to-video Jaws rip-off. For starters, the tagline sucks. Why? Because saying a shark is big, smart, fast and mean doesn't make it one bit more terrifying than any other Hollywoodian sharks, which all share these specific attributes. And smarts is pretty hard to evaluate in such a creature, let alone convey through a script without turning it into a farce. Secondly, the quality of the shark image is awful. It is blurry and unconvincing, as if an underwater shot of the creature had been taken from the film and superimposed behind the photo of a girl in a whirlpool. Never could anyone believe this shark is actually threatening this girl (who sports more of an annoyed expression than a terrified one). Finally, there is the girl herself. Who is this, exactly? The answer (drumroll...): 27 year-old TV actress Saffron Burrows! Who? You know, the girl who played Andromache in Troy! In here, she represents a huge casting mistake. You see, we are actually supposed to believe that this 27 year-old girl is a medical doctor spearheading a billion-dollar alzheimer research project, and whose forty-something father was taken away by said disease. It's an even bigger stretch to believe this load of bullshit than it is to believe in genetically-enhanced super-sharks. On with Miss Burrows; although she is somewhat good-looking (her pink lips are nice, as well as her wet breasts) I think it was ill-advised to frame her alone in this poster, especially since no star names are even mentioned. Burrows' appeal is almost nil as a star, and so, I wonder if they relied on her only for sex-appeal... And if they did, why not also include buffed-up Thomas Jane in there? A total failure, this poster. But here is a really great one. Just look at this: 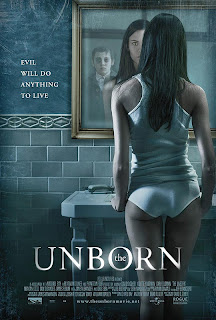 The Unborn is a poverty-row film in comparaison with Deep Blue Sea, yet it manages to entice the viewer tenfold with its (international) poster. It does so with simple things. First, by exploiting the film's primary asset outright. By "primary asset", I obviously mean Odette Yustman's ass, which is something the average genre fan (a horny male teen) certainly likes to see. I know I do. But the poster does other things. It sports a nice, campy tagline (Evil will do anything to live), which, combined with the title, help us make sense of the scenario. It also shows us what kind of monsters to expect, and in what situations. And although you could fear a new Ju-on or Ringu rip-off from the images, at least you know there will be a beautiful ass to look at. Besides, if I had to choose between what looks like a grade-B shark-attack yawner and what looks like an exploitative, old-school ghost story, I would undoubtedly choose the latter.

Ok, now on with the review!

I first saw Deep Blue Sea as a teenager, and I remember liking it quite a bit. So yesterday, I bought a VHS copy of the film for a buck, thinking I could enjoy it again. But I didn't. Not one bit. I couldn't finish it actually; I was so bored that I turned it off and went to bed. I had to watch the final twenty minutes this morning before I started writing this review. Why did I like it as a teenager, and not now? Because I was candid back then, and eager to swallow a bucket of shit, as long as there were some cheap thrills and cheap laughs in it. Hell, back then I even thought that Sam Jackson's demise halfway was a brilliant plot twist! The truth is I have reviewed Shozin Fukui's Rubber's Lover a few days back, and was struck by the stunning similarities between the two films' premises, and thus underwhelmed by Deep Blue Sea's lackluster execution.

As I mentionned above, Saffron Burrows is the head of a pharmaceutical research group operating from Aquatica, a huge underwater facility surrounded by shark pools and titanium fences. Unfortunately for her (and her ex-con shark handler Tom Jane), the corporate sponsor funding the research has decided to shut her down, sending an executive (Sam Jackson) to oversee the operation. Now the team has a scant weekend to impress said executive so he will leave them be. During that time, the test sharks escape, terrorizing the crew who must find a way to reach the surface. It's basically Rubber's Lover with sharks instead of noise machines, but without either its zany madness, perfect rhythm, or intriguing photography. Like in most Hollywood films, tension is obtained by cranking the volume to dizzying heights, or by having charaters yell: "Watch out!" All the situations are formulaic and interchangeable, leaving a lot to be desired.

The film opens with a rather savvy sequence wherein two couples of kids are attacked by a shark, but then saved by Thomas Jane's character. It's a play on expectations where we wrongly figure the kids to be fish food. The film thus mocks the teenage slasher sub-genre, positing itself de facto as something of a nobler nature. But it also reveals the identity crisis at the core of the entreprise. Deep Blue Sea is a straight shark-attack film featuring rows of teeth and mangled bodies, but it is also an Alien-type "trapped with the beast" caper that relies heavily on the conventions of space horror. And although such hybridity sometimes forces some slightly novel situations (such as the stretcher-throwing sequence), it condemns the film to ineffectiveness. The reason lies with the shark, and its inability to pursue the characters above ground. Every sequence that is not underwater is devoid of tension, which forces the screenwriters to find all sorts of incongruous reasons why the characters need to be submerged (such as design flaws in a mutli-million dollars research facility). But what's worse is that despite the apparent originality of the premise, no situation in the film seems novel. Not one segment has a personality of its own.

Razzie-nominated director Renny Harlin, who could be said (in some quarters) to have ruined both the Nightmare on Elm Street and Die Hard series, the man at the helm of Cutthroat Island, the greatest fiasco in Hollywood history, does a purely functional, albeit acceptable job here. The underwater sequences are okay, the gore is okay (what happens to Jim and Tom is particularly cool), there is some gratuitous nudity, the acting is average (save for Rapaport who's great as usual in a subdued comedic role), but in the end, it is the lack of an edge in any department that prevents the film from ever lifting up. It's déjà-vu the whole way through, in the bland exchanges between the bland characters as well as in all sorts of familiar situations lazily patched together. There is even the tokenest of token black guys played by none other than rapper LL Cool J (Ladies Love Cool James for those unfamiliar with the Def Jam artist). And he doesn't die! I'm sure it was a great relief to the black community...

2/5 : for failing to make something other than formulaic drivel out of a good premise.
Posted by Le cinécurieux at 7:27 AM