Either a remake of "The Thing from Another World" or simply a tighter adaptation of John Campbell's novella ("Who Goes There?, 1938), this second of three Kurt Russell vehicles directed by Carpenter has all the graphic grossness one could hope for, with tight direction and solid acting (especially from its animal actors) to boot, and a loud Ennio Morricone score as a bonus. In the opening moments of the film, a Norwegian crew of Antarctic explorers are chasing a runaway Alaskan Malamute, very much trying to kill it. Have they gone mad? Or is the dog actually a vicious E.T. in disguise? The American crew who end up sheltering the Malamute soon find out, the hard way. You see, the Norwegians have just uncovered the remains of an alien spaceship buried in ice since thousands of years, as well as the frozen corpse of its pilot. Unfortunately, this alien is a parasitic metamorph who absorbs other lifeforms in order to use them as disguise. And the dog was one of these disguises. The Americans try to fight it, but they also have to fight paranoia and mistrust in the process as they ignore who could have been infected. Carpenter's best film, save for the seminal slasher, "Halloween", "The Thing" tanked at the box office, making a slim home profit of about 3 millions. Aside from the near-coincidental release of "E.T." (a slightly more accessible alien film), this could well be explained by the minimal characterization and the total absence women in the film, which could translate in a minimal involvment from moviegoers. That's all and good for those who wish to see round characters get summarily killed, but as long as you're in it for the alien, you should watch this instead of E.T. I don't usually condone FX-driven films, but here, it is elevated to the level of art. The dripping goo, melted faces, springing spider legs, wiggling tentacles, toothy mouths, framed in all their clunky glory... It brings a tear to my eye. Finally, here is a grand piece of horror craftmanship that is not merely glimpsed at, but shown proeminently. Alone, it will insure the perenniality of the film. 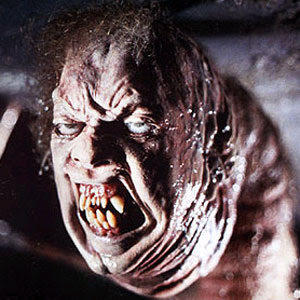 "The Thing" is above all a fanboy's film. Russell's character, for example, may not possess an intricate background, but he is manly and cool, with shades and a hat. That is sufficient for the needs to fulfill. The scene in which the protagonists test each others' blood with a hot coil, without being truly tense or emotional, constitutes a moment of anthology nonetheless because it's a great concept! The apparent laisser-aller of the filmmakers, the gaps in emotional logic can be easily filled by any horror fan. Suffice it to say that Carpenter makes great use of the claustrophobic Antarctic sets, and the sweet creature concept. In the end, it doesn't really matter whether or not the viewer was 100% involved in the storyline, because he's had his candy. Great sets, great direction, sound and monster design. All that's missing is a big bowl of popcorn.