This Oscar-nominated film (Best Supporting Actor, Best Makeup) is an highly embroidered account of what happened during the shooting of horror landmark Nosferatu. It posits that ghoulish actor Max Schreck was actually a real vampire hired by neurotically perfectionist director Murnau to give credibility to Bram Stoker's lurid tale of lust and thirst. 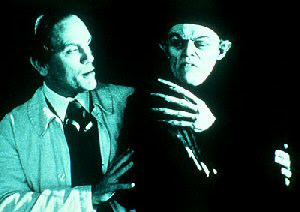 There is an annoying misconception about Murnau that mares the efficiency of this otherwise solid effort from the get-go. It is the idea that the great German director somehow required a method actor to heighten the realism of his Dracula adaptation. Realism? Er... Nosferatu is an expessionistic horror film. Expressionistic! It features landscapes shot on negative stock and magical cuts between sets hundreds of miles apart. Murnau himself was a studio director, a master of artifice (just ask documentarist John Grierson!). He was not the least bit interested in the realism that we, Americans, hold so dear. Now this misconception doesn't make the film uninteresting, only historically innacurate and unable to capture the true nature of Murnau's work. What it does capture is the folly of an artist too dedicated to his work. Using Nosferatu as a working canvas, Merhige, Katz and company take us to the extreme limit of art-making, where human life loses all value in front of the reigning oeuvre. Shadow of the Vampire is a passionately-made film about passion and where it might take you. It features two vampires, both of whom live off the lifeblood of others. One is a lonely old count with the hots for actress Greta Schroeder (played by Catherine McCormack, whose superb breasts briefly appear onscreen), the other an authoritative director with an uncompromising vision.

Quite classically shot, this character study benefits from a bullet-proof script that contains many fun little nods to film history, splendid art direction that brings you straight back to the complex outdoor sets of Murnau's film, and some extraordinary acting that manages to give life to otherwise improbable characters. As a soft-spoken, snooty Murnau, John Malkovich perfectly walks the line between self-assured love for the medium and total artistic neurosis, while Willem Dafoe (in heavy makeup as Max Schreck) offers a splendid antagonist performance as the twitchy old count who thus becomes domineering and pathetic all at once. Hell, even Udo Kier is great in this one (as producer Grau)!

The general public will likely enjoy the great quality of the film, its awesome performances and its involving outlook on early filmmaking. The art-house crowd will praise the postmodernist approach to the material, that is the mixing of genres and the brilliant mise-en-abîme at the heart of it all. But film scholars will likely be disappointed. I know I was. For three reasons: 1) the bothersome historical inaccuracies (such as references to Eisenstein as a world-renowned filmmaker when he actually hadn't directed one major film when Nosferatu came out, let alone when it was being filmed), 2) the bland Hollywoodian approach to some overly-expressive, almost experimental source material, and 3) the lack of genuine tension, suspense or any horror elements that are not borrowed from the source material (including updates on vampire mythology). All in all, Shadow of the Vampire is a well-made, ambitious project that fails to attain its lofty goals because of some serious lacks in the film history department. To paraphrase the Boston Herald, it is only the shadow of Murnau's classic film, a smear in the great director's legacy.