This second entry in the infamous All Night Long series is not a sequel. It's just another bloody story of revenge pitting nerds against homicidal gang members. Shunichi is a typical recluse nerd enamored with a naked plastic model. He mostly stays home chatting on the Internet (a very early, crude version thereof) because outside roams a sadistic gang of bullies hellbent on torturing him. Their leader, a soft-demeanered psycho wearing all white, is apparently an old friend who's got a considerable crush on him. After a series of grueling trials (including the crushing of his beloved model, cigarette burns to the genitals, severe beatings, and a sordid night out where he is forced to torture a raped, starved, nail-less, humiliated, fork-punctured girl), Shunichi finally manages to find some friends off the Internet who are willing to lend him the money he "owes" his bullies. That night, they celebrate. Until they are all taken hostage by the gang and tortured "all night long". In the end, everybody is dead (even the gerbil) except Shunichi , who has taken justice by the sword, thus matching the ruthlessness of his captors. 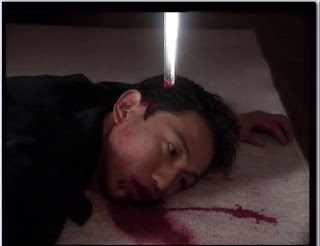 This film is akin to theater. It is shot in bare, interior sets using a cheap video camera that manages to capture every sordid detail in the frame. Using almost no artifice (including close-ups and camera movements), the film is all about content, that is the extreme cruelty of the gang members and the bloody retaliation that ensues, which we are forced to watch from beginning to end. Confronted head-on with this surprisingly vicious violence, the viewer is in for a very unpleasant, nerve-racking experience.

Atrocity is one of the most depressing, disturbing films I have ever seen. There is nothing good, or uplifting about the protagonist. He spends his time alone in a dark room filled with disorganized piles of stuff, with no family or friends to look after him. And when he does make friends, they are savagely tortured in front of him. His most faithful companion is the mute plastic model, which he lovingly paints and kisses to a soft, sad tune. I have tears in my eyes just thinking about it: extreme solitude embodied by this scene of a boy and his plastic lover (shot to that damn syrupy song!). I was also disturbed when the innocent gerbil was splashed with (fake) blood. For me, that was another symbol of innocence soiled. Everything in the film is dark, twisted but most of all, inescapable. The faith of Shunichi was sealed the instant that bunch of sadistic gaylords set sights on him. Unfortunately, he is not the only victim here. There are two young (and pretty) girls whose treatment could infuriate the most stoic of women. And two other male victims who are forced to chew knives or watch their girlfriend being drugged and raped.

Atrocity didn't get a theatrical release because Eirin (the bad-ass Japanese rating board that fought to get tame Battle Royale banned) wouldn't allow it, saying the "overall tone of the film was unacceptable". Although I don't agree with any form of censorship, I must say that the film's tone is indeed unacceptable (for the general public). For the first 65 minutes, it almost solely features sadistic tortures dished out on innocents, while the last 12 minutes only shows sadistic tortures dished out by soiled innocents on the guilty. Overall, all we observe is the sick pleasure of sick individuals. Nihilists, to say the least, who value human life only insofar as other people's pain is the remedy to their own ailments. Why anybody with a healthy mind would want to see this is highly questionable.

Now, whether the film is a serious psychological study of extreme, asocial behavior (typical of the Japanese do-or-die mentality) or simply a despicably exploitative piece of garbage is up to you, the viewer. But ethical questions aside, the film is intense as very few and it features many memorable scenes of real-life horror. It may be lacking some production values, but it is undeniably effective as a masochistic experience. Watch it, then you will feel completely hollow. 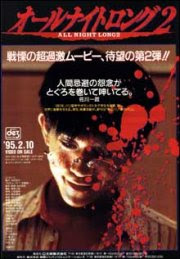 Posted by Le cinécurieux at 1:39 PM