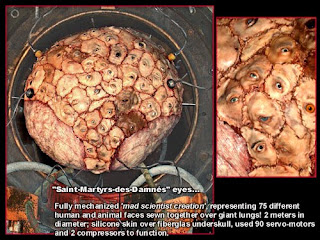 Here is somewhat of a rarity: a big-budget québécois genre film (described by director Robin Aubert as a sci-fi thriller, actually more of a mood-heavy horror/sci-fi hybrid). I may be biased, but I'd say it's actually heart-warming to see such outstanding craftmanship from artisans bien de chez-nous. Because when I say "big-budget", I mean québécois big-budget, that is 5.5 millions. Considering that BloodRayne (2006) cost more than four times that ammount, and House of Wax (2005) more than seven times (I guess they had to rent a trailer for Paris Hilton's chihuahua...), i'd say Saint-Martyrs-des-Damnés is pretty cost-effective. Sure, it's overlong, with an underwhelming second half. Sure, the lead is pretty lame, and the ending unsatisfying. But overall, it is well-made and well served by a convincing, all-star cast. Most of all, it's worth a peek for the outstanding art direction and Aubert's surprisingly competent direction. Hell, here is a guy who mooned everybody on the set of Tout le monde en parle (a popular québécois talk-show) in order to promote the film!

TV actor François Chénier (known mostly by people my age for his interpretation of Carl "The Cat" Charest in the teenage sitcom Radio Enfer) plays Flavien Juste, photographer for a National Inquirer-like tabloid. Seeing how their journal is struggling for sales, his editor (and surrogate father) sends him along with a photographer to Saint-Martyrs-des-Damnés, a "Bermuda Triangle" of a village where "people disappear without a trace". Upon arrival, his photographer friend disappears, and he decides to investigate. But what he ends up investigating is not only the disappearance of his friend, but the whole mystery surrounding the town, its weird inhabitants (which include Monique Mercure, Monique Miller, Luc Senay, Germain Houde and Michel Forget, among others) and the ghost bride he keeps seeing.

The plot is pretty straightforward at first, then it twists and turns toward a contrived finale that fails to explain everything, and most notably the nature of that huge, stitched-up gibbering mouther we keep seeing. To tell you the truth, I was enthralled by the first half of the movie, which sets up a multi-layered and potent supernatural mystery involving luscious sets and intriguing characters interpreted with conviction. Seeing Germain Houde (a legendary Quebec actor) calling François Chénier (a pretty average TV actor) a "petite tête de marde de face de raie" (translated as "little piece of shit" on the DVD, it literally means "little shit-headed ass-crack face") was a welcome bonus... Unfortunately, and it is the case with most films of this ilk, once the mystery starts unraveling, the story loses its interest, and the flaws in the scenario become obvious. Which is what happens about halfway, at which point the film takes a plunge for the worst, notably by introducing a very unconvincing romance between Flavien and a peripheral character played by Isabelle Blais. And although the ending features a fun little duel, it is mostly unsatisfying, with metaphysical strings attached that drag the film into the realm of silliness.

Nonetheless, the overall, technical quality of the film is quite good. The atmosphere of a creepy, run-down village is conveyed quite nicely, and without tricks, thanks mostly to some flawless art direction. The actors do a decent job interpreting characters which are sometimes pretty silly, while Aubert directs them well and frames with the steady hand of a seasoned vet. In the end, you may not be stoked by the originality or quality of the scenario, but you cannot deny the fact that there were some very competent hands and eyes at work for making this film.

2.5/5: for being a well-made, albeit confused and silly movie.

N.B. If you want to see hottie Isabelle Blais naked, you can do so with this film, but I suggest you rent Borderline (2008) instead. She is much nakeder in there, and the film is actually better, so...
Posted by Le cinécurieux at 9:32 AM