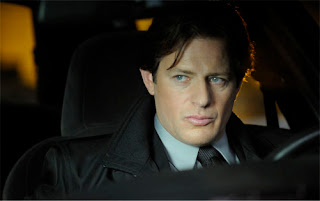 "Is it shit?" First thing I wrote in my notepad. But overall, I was happily surprised by this juicy Halloween treat. Happily surprised because I was expecting shit. After the first two entries in the series (the second of which was atrocious, with choppy editing, an hyperactive camera, boring characters, formulaic plotline, lame sets...), I had decided to steer clear of "Saw" altogether. Then #3 and #4 reared their heads. When #4 was first publicized, I prophecized a series of ten. Up to now, I am right: one each year, it's starting to look like "Friday" (11 films total including "Freddy vs Jason"). Unlike for "Friday", however, each "Saw" film is not stand-alone. It is merely an episode in one lenghty soap opera featuring some of the most unsymphatetic characters this side of "The Young and the Restless". Because of it's fast pace and how plot points are thrown around out of context, the film sins by narrative opacity. For the unintitiated, it seems nightmarish (and pointless) to try and put the pieces together.

From what I understand, the main plot involves a "police detective" named Hoffman (I'll get to him later...) who became Jigsaw's new successor following the demise of one "Strahm" from whom he retrieved the severed hand that he uses to spread fingerprints in order to cover his trail. Unfortunately for charisma man Hoffman, two detectives are hot on Jigsaw's trail, one of which he thought had died, the other whom we discover had covered her death. But Hoffman is not alone a Jigsaw follower, because there is also ex-wife Jill who's involved as well, and another girl named Amanda (the penitent junkie from #2), who we now learn, has caused Jill's miscarriage. Amanda is only shown through flashbacks (presumably because she was killed in a previous entry), as is dead John Kramer, the original Jigsaw Killer whose master-plan is now revealed through a series of envelopes bequeathed to Jill.

The film showcases the intricate relationships of these obscure characters as if they were close friends of everyone in the audience! I mean, as an average moviegoer who has skipped the last three installments of the series, why should I care if some wooden, grade-F Stallone clone who would never pass as a police detective in a million years gets caught by two under-developed characters whom I am supposed to know from films I haven't seen? And why should I care about Jigsaw's master plan? Granted, John Kramer is the most interesting character in the series, and Tobin Bell fleshes him out quite nicely. Yet his message his stale. "You must stare death in the face in order to truly appreciate life..." Yeah, yeah, yeah... It was a good gimmick originally, but it can hardly become the leitmotive for an entire series. And besides, including dead characters in an intricate series of flash-backs overlapping all kind of obscure events going on at present only adds to the confusion. The result is that we are forced to stare at what is essentially a pulsating mass of narrative tentacles flailing around to no avail. Accessibility, people! That's the only way to draw new moviegoers to the series whereas relying solely on returning fans might be a fatal mistake. 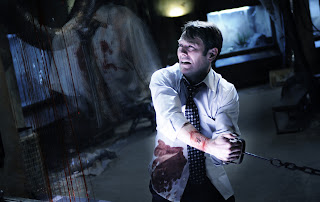 Fortunately, the film features a great sub-plot involving characters only slighly related to Hoffman and Kramer's story, whom the audience can recognize and react to. They're a bunch of money sharks from a health insurance company, caught in Jigsaw's game, and thus forced to face the consequences of the death penalties they impose every day on poor Americans. If "Saw VI" lacks a brain, it certainly doesn't lack balls, tackling the health care issue head-on as it does. It is a blue-collar film, like all horror should be. It tackles blue-collar issues and reflects onscreen the desires of a blue-collar audience, namely the trial and torture of our century's wickedest criminals: insurance people. Although I personally have access to free health care (through the sublime RAMQ which pumps tax dollars like a mad vacuum), I can understand the tragedy of the sick American poor, of cancer victims, for example, robbed of everything they own by a crooked system that values corporate profit alone. And I can see how these people deserve justice. And justice is served, in a sublimated form at least, with "Saw VI". "Healthcare decisions should be made by doctors and their patients, not the insurance company", quips a suddenly political Jigsaw before sentencing four "application denyers" to death. Personally, I was thrilled by the ordeal imposed on the evil vice-president of the company (the man who incidentally denied coverage to Kramer). My heart pounded at the sight of his suffering. It made my day to witness his struggle, seeing how much his victimization is righteous compared to that of the junkies and cigarette-smokers from previous films.

All in all, "Saw VI" hits home mainly as a meditation on the evils of the health care system, benefiting from an hyper-kinetic treatment that works well with the trial sequences, but very poorly with the contrived, uninteresting main plot featuring too many irrelevant characters and situations. Just like a Halloween candy, the film is tasty enough for a lick, but in the end, it will leave you unfulfilled.