What can I say? This is the maestro’s masterpiece and thus a genre landmark. Rarely are horror films so technically accomplished as this one, and despite the secondary importance accorded to the plotline (involving a rather underwhelming finale), the ensemble is almost flawless. Argento herein perfectly combines all of his signature techniques (complex camerawork, mindwarping color schemes, insane rock soundtrack and vicious gore) to create something much more than his trademark giallo, something memorable which has found its way into the collective unconscious like a very determined maggot.

What we’re treated to is not a stylish stalk-and-slash police story blessed with minor innovations, like many other Argento films, but a full-fledged oneiric venture into the domain of a witch, an experience rarely equalled in the genre. Why? Because rarely has the unholy powers of a witch been so successfully translated into cinematic terms. The airborne, all-seeing eye of the camera (as well as the henchmen’s viewpoints) is her omniscient gaze, and Goblin her chorus of demons, peppering the soundtrack with hints of her presence. The excentric settings, full of mirrors and opressive colors, are architectural extensions of her body with which she deceives and terrorizes her victims. Truly every moment of every scene is filled with her influence; the celluloid itself pulsates with her occult power.

As usual in Argento films, the killer is never revealed in full until the end. Initially (during the double murder), she is barely more than what is expected, that is a vicious pair of arms and some dark clothes. But as the plot unfolds, we realize she is much more than a physical presence. She is a dark, venomous force that takes infinite shapes and infests every space. As such, she is a monster far more dreadful than any of Argento’s staple deranged killers, all of which unfortunately suffer from a grounding in reality that implies tangible (thus limitative) methods and motivations. More importantly, Helena Markos is not a lone killer; butlers and head mistresses are also enemies, as parts of a killer system that surrounds and entraps the protagonists, much like in the haunted house subgenre. Rarely in Argento is the entire environment a menace to the characters as it is the case in Suspiria and this is regrettable, because it herein greatly heightens tension, effectively compensating for the scenario’s sometimes slow pacing.

Cinematographically, the film is one very buttered toast, extremely heavy on mood rather than plot devices. The atmosphere is saturated. When we’re not blinded by the wall colors or the intricate set design, we are deafed by Goblin’s rocking soundtrack (undoubtedly their best effort for any Argento film); when we are not moved from our seats by the virtuoso camera, it is by the savvy editing (in the dance rehearsal scene, for exemple, where rhythm is at its peak), all of which contribute to our disorentation and general unease. All of which draw us inside the world of the film for a mesmerizing journey. 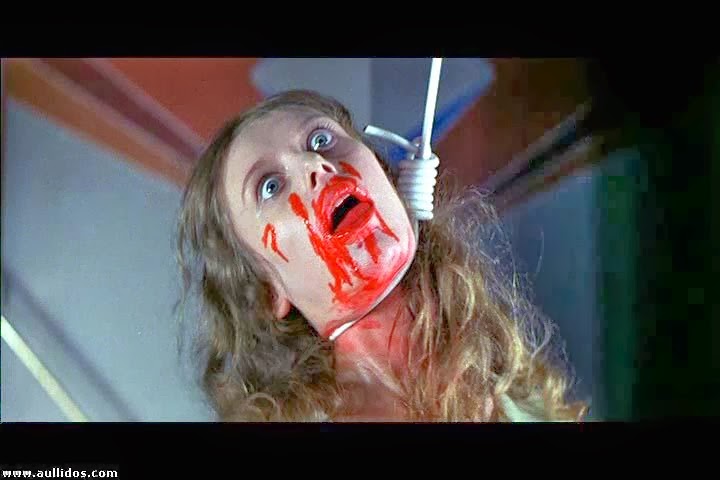 The film’s limitations (although it is debatable that these constitute actual flaws) lie in the scenario which is, to say the least, pretty minimalist. It is the classic tale of the righteous outsider who faces evil abroad, a seemingly undying evil to which she is the unlikely solution simply in her quality of protagonist (i.e. center of the universe). The opening murder scene is heavy on violence and style, constituting certainly a high point, an uppercut so to speak, to start the fight. Then, it briefly becomes a mystery surrounding the death of the ballerina, a mystery that soon spirals out of control into the occult. After that, the plot leaps clumsily toward the conclusion, linking nasty events one to another around the flimsy thread that has become the original mystery.

The performances, ranging from awkwardly subdued to decent are barely worth mention. It is not the actors’ fault however, struggling with dumb lines in as much as five languages, if the film is not character-driven, but mood-driven. As pawns in Helena Markos’ game (as well as Argento’s itself), none of the characters deserve remembrance, except perhaps for the sinister headmistress Tanner, whose authoritative shape and attitude contribute their part to the whole opressive atmosphere. Some fans of the genre may be stoked by Udo Kier’s presence in the cast. Those people only risk finding his performance that much more underwhelming. Despite his excentric background, he plays it incredibly straight here as the obligatory scholar who artificially forwards the plot. Nonetheless, the casting is esthetically very sound. Every actor looks the part. It is unfortunate that their characters lack the roundness necessary to elevate them above simple tokens, although it doesn’t impair the flow of the film in any major way.

All in all, Suspiria is a superior horror film, mainly for technical reasons, but also for its place in Argento’s body of work. All of his trademark techniques are used here with the greatest of effects. The tension, atmosphere, gore, soundtrack and set design are not bound by logic, and therefore can be expressed fully. As a master stylist and abstractionnist, Argento has made his truest film Suspiria. Never before and never again has he been freeer from the constrictive nature of the giallo. And never has he ventured so deep in the domain of pure horror (as opposed to the thriller genre). A uniquely-crafted film, Suspiria is without a doubt, one of the best entries in horror cinema.

5/5: For its masterful use of technique to create a film of pure affect that's widely considered a classic.

NB - This film is discussed in Elusive Terrors - Horror Films and the Moving Frame.
Posted by Le cinécurieux at 10:33 AM