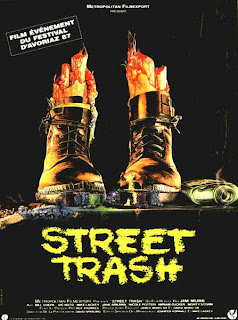 Written "to democratically offend every group on the planet", this solid cult classic contains everything from melting derelicts to severed penises flying accross the screen, with a healthy dose of foul language, brutality, dumpyard sex, gang-rape and necrophilia inbetween. The premise involves a sleazy Brooklyn storekeeper selling a batch of rancid purple liquor to the local homeless which causes them to melt or explode in very graphic ways. But in the end, the killer hooch is little more than a MacGuffin, because despite obvious exploitation purposes, the film rather plays like a milieu study than a straight horror venture. The neighborhood of Greenpoint is where the film was shot, right accross the bridge from lower Manhattan, which we can see in the background, taunting the characters with its wealth and order. Many dirty derelicts populate a local dumpyard and the streets nearby, a good portion of which are Vietnam vets or other war victims (such as the two sons of a shell-shocked soldier). The shades of Buddy Giovinazzo's "Combat Shock" may be glossed over by purple goo, but the message is still the same: post-Vietnam America is hell. Dreams of Vietcong vampires disturb the night while the day is a fight for survival without dignity. Certainly not up to the level of "Taxi Driver" or "First Blood", "Street Trash" is still one of the finest example of the Post-Vietnam sub-genre.

This film is so excessive and juicy, in a darkly humorous way, that it feels right at home in the 1980s (a splatter-friendly decade of genre fun). And despite the dilapidated look of the characters (which is quite well-crafted), the film itself is not cheap-looking in any way. Its photography is surprisingly crisp, and its settings are quite elaborate. All that without mentioning the incredible special effects which, without driving the film entirely, constitute a huge part of the trashy fun we get out of the experience. That, and the irreverent attitude of the protagonists, general abundance of fluids, full-frontal female nudity, and this lovingly-framed severed penis used in a lenghty game of keep-away (talk about black humor!). The acting is uneven, but generally good with R.L. Ryan (mayor Belgoody from "The Toxic Avenger") and Tony Darrow stealing the show as the perverted owner of the dumpyard, and a small-time mobster respectively. The film also features what could be THE BEST POLICE ARREST EVER CAUGHT ON FILM. When Bill the cop puts his hands on one of Nick Duran's hitmen, he beats him up senselessly, drags him to the bathroom, pukes on him, flushes a urinal over his head, then leaves. It's just one of the many moments in the film about which to tell your friends: "You've GOT to see this!" All in all, "Street Trash" is quite a piece of anthology. A no holds barred trash film full of ever-lasting images that introduced two mammoths to the film industry, director and steadicam operator Jim Muro, who went on to become James Cameron's choice operator (he did the steadicam for such classics as "The Abyss", "T2" and "Titanic") and Tony Darrow, who later starred in five Woody Allen films and many more mobster films including "Goodfellas", "Mickey Blue Eyes", and "Analyze This". Be sure to stick around for the credits as Darrow himself interprets the hilarious closing song, "We Do Things My Way".