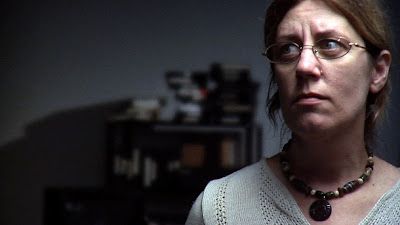 Philosophy is the art of asking questions, not of gathering answers:
You Are Here

It's hard to delineate You Are Here and make it sound appealing to larger audiences. Actually, it is somewhat of a hard sell anywhere outside the festival circuit, considering popular tastes in matters of story structure and the crowning importance too often given to the literary model of storytelling. Barely narrative, but not technically experimental either, this Canadian oddity rather invites the viewer to play along in a series of philosophical games embodied by several micro-narratives popping up suddenly, then interconnecting in a surprisingly coherent grid of ideas. While amateurishly-produced, the film boasts crisp HD photography used to frame various intriguing, intricate images bursting with meaning.

The merger of several short films, this aggregate entity manages to attain the lofty goal of elaborating a very potent model of the human mind in its reckless search for meaning. Left to fend for himself, the viewer can choose to enjoy it as a puzzle, question its nature or dismiss it altogether, the former of which is the optimal approach to really get a kick out of this rather unique film experience. Because while Your Are Here puts forth a series of questions, some of which are nearly opaque, it also criticizes obsessive over-intellectualism in trying to peg answers down, begging in the process an urgent question about the very nature of philosophy. After all, the latter is the art of asking questions, not of demanding answers. And although answers are more comforting than questions, they merely help the mind stagnate in a cesspool of self-satisfaction, whereas questions open it up to renewing influences. But most importantly, it helps one hover above the mundane acceptance of things as they are, making one ripe to try and change these things. In other words, we could say that You Are Here is actually a revolutionary film for it cultivates the legitimacy of questions over the stagnant process of answer-hunting. That said, while it harbors professorial looks, it eventually amounts to a series of delightful, playful narrative experiences that are sure to draw the viewer in. Believe me, fun is the name of the game here, that is if you manage to adhere to a liberal, non-mechanical approach to its intellectual structure.

Contrarily to many attendees, I didn't stay in the theater for the Q&A, happy enough with what I saw not to be bothered with superfluous, contrived explanations. I rushed aside instead, scribbling away my thoughts incoherently, creating a jumbled amount of notes which I have a real hard time deciphering now. Needless to say that my excitement got the better of me for I had just unearthed an unexpected gem, just as the guy who discovers one morning that his property lies atop a rich oil well. You see, You Are Here was just filler. I had no intention of purchasing a ticket when I first went through the program. But seeing how it lied just between Bullhead and Victims, I decided to give it a try, thus encouraging local production... and not the big Hollywood bullies. I couldn't believe my eyes as the film unfolded, multiplying constantly in a sea of obsessive interlocking episodes, all of which seemed designed to catch over-thinkers off guard. Mimicking the confused protagonists onscreen, those puzzled viewers who fished for immediately intelligible solutions, probably felt frustrated as answers kept eluding them to better give center stage to other questions.

To those people, I would loved to have given this simple answer, which I think sums up the bottom line of You Are Here better than anything else: "the answer lies across the street". You see, while the film played to a sold-out crowd in the De Sève theater, Cronenberg's seminal Shivers was playing in the Hall. And I must say that such a programming choice is tantamount to genius, both films being perfectly complementary in their criticism of over-intellectualism. For those unfamiliar with Cronenberg's first commercial feature film, filmed right here in Montreal, I will etch a brief synopsis.

Discontent with society and its fixation on the intellectual rather than the physical, medical researcher Emil Hobbes devises a parasite made of "venereal diseases and aphrodisiacs" designed to turn normal people into sex-crazed zombies no longer focused on trivial, "intellectual" affairs. At some point in the film, his partner in crime, the fantastically-named Rollo Linsky, quotes him saying: "man is an animal who thinks too much, an over-rational animal that's lost touch with its body and its instincts". While this doesn't warrant the elimination of all thinking humanity, it certainly is true, especially where You Are Here is concerned. Man is an animal that thinks too much. This is precisely what I took out of this latter film as I watched some very helpless characters trying to find precise explanations for facts that would better be delineated using only one's imagination.

A good example of this is the mystery door appearing on the side of a skyscraper. Since it leads nowhere, one of the characters starts obsessing over its origin. And thus, the desire to crack the mystery eventually overwhelms said character, entangling him in the futile pursuit of an unnecessary explanation. It is as if the immediate world around us could no longer be merely felt, but needed to be explained also, as if only an intellectual explanation could be satisfactory in making sense of anything caught by the eye. The film then proceeds to entrap a variety of characters in similar binds, making them search for answers and follow predetermined routes with slavish nonchalance, showing the pursuit of answers as a way to lose sight of the very question to which it pertains.

Ignorance is bliss: children see the world as a place of
wonder, not as a problem to be solved

As I sat in the tiled hall of the Norris building after the screening, I watched people come out of the Q&A and comment on the film. From what little bribes of conversation I could overhear, I understood that many were annoyed with the fact that the film is "merely" a collage of short films, brushing its fragmented narrative aside as a sign of weakness, when it is actually only one of budget. From where I stand, You Are Here cannot be dismissed with one fell swoop. And while it is a collage, it is a pretty awesome one, one that manages to be entirely coherent, even within the vacuum of ideas which constitutes the narrative. Anyways, people should like collages in this day and age, when everything (fashion, art, thought...) is a patchwork of previous forms stitched together for better or for worse. Hell, Montreal is a collage, encompassing colonial-age mansions, international-style skyscrapers and orange-plated apartment complexes within a single block. Many families are collages, crowding houses with tens of children from several different marriages. The importance now is not conformity, but coherence. Hence, while I love Montreal for its uniquely post-modernist look, so too do I love You Are Here as a single entity. Not as a series of questions, but as a living film which precisely mirrors what little grasp we have on our surroundings, and most of all, the crippling desire to find answers where one should formulate a secondary question instead.

That said, if you can't remember your password one morning, when faced with a blank line on the computer screen in your diminutive cubicle, in a vast city of which you occupy but an anonymous 100 square feet, then maybe you shouldn't even try remembering. Instead of trying your best to put one and one together, trying to pinpoint the precise moment of inspiration which has led you to select this or that password, maybe you should ask a question instead, such as "Isn't it better for my session to remain locked and for me to walk out of the office building, into the streets, and as far away from the city as possible?". Better yet, why not start asking "What is the Matrix?" as one jaded daytime programmer once did, and which led him to save humanity from the clutches of rampant capitalism? How about "What data can be so important as to be password-protected?".

If the pursuit of knowledge is done mechanically (without conscience), it is null for it becomes akin to the data processing achieved by computers. And at the dawn of 2024, the projected year when computer chips will have the power to replicate the processing power of human neurons, acting like a computer makes one almost obsolete, an empty shell from a dead world. Because while gathering information can be done by men and machines alike, it is the ability to reflect on this data (read: to ask questions) which separates the former from the latter, making humanity more than the sum of its knowledge. Tagging and classifying found objects, or mechanically solving problems doesn't help one achieve sentience, nor does following orders. Thus, I suggest we consider one of the main tenets of Cartesian thought: "I think therefore I am" in order to reclaim our minds from the debilitating effects of capitalism, which disseminates fake equivalences such as "I buy therefore I am" or "I talk/text therefore I am". If we accept to become the simple aggregates of the items we own and the factoids we have integrated as party tricks, then we barely qualify as sentient beings and thus lend ourselves to being literally replicated and replaced by any machine able to store same factoids and eruct them given the appropriate cue. And that is where films such as You Are Here come in to save the day.

The appeal of Cockburn's film lies in a clever mechanism which involves the viewer intellectually, prompting him to try and solve riddles with the film's characters while simultaneously pointing out the rigidity of the answer-gathering process in which they are all involved. This antagonistic process can best be explained by discussing the enjoyment derived from experiencing the film proper. While it works perfectly as a puzzle, drawing the viewer in as if it was an elaborate game room for idiot savants, it loses all relevance if one finds a definite solution to the puzzle, then pushes it aside, hence defusing its potential as a mind-cultivating device. In the end, the very fact that it prompts questions instead of offering answers makes You Are Here a worthy enterprise and one that should be celebrated as a rare example of involving storytelling focused on active film viewers, the final result being more of an intellectual collaboration between the director and his audience than a dry lecture that provides answers to be jotted down in rigidly structured notepads.


3,5/5 A revolutionary film, not so much in a narrative sense as in its ability to tickle the mind and make one remember the majors tenets of Cartesian thought. Also a powerful reminder of 2024 and the consolidation of the idea according to which the quest for knowledge is a purely mechanical process devoid of sentience. One will certainly find shades of Ghost in the Shell in this delectable meta-puzzle.

Posted by Le cinécurieux at 7:54 PM