Here's another bright Saturday during which I could've been wandering the streets like any regular Joe, watching the wind try and lift up the ladies' skirts, getting a nice tan for myself, casually drinking beer on a crowded terrace... Instead, I locked myself inside once more, making friends with the people I know, luminous figures of angst and hope locked in a world out of reach, but not out of mind. Actually, that Saturday was the start of something important, something much bigger than myself, and which I had to conquer on my own. That is my first ever 12-film weekend! Seeing how hard it is to schedule 6 films on a Sunday at Fantasia, I'm pretty sure that it is impossible to see more than 12 films on any given weekend. Now, I had waited for the opportunity to do so for many years only to see myself fail over and over. And now that I had succeeded in crafting the most saturated lineup possible, I just needed to push through, and make sure that the sacrifice of my weekend was not in vain. Unflinching as I was in my quest toward the number 75, I managed to stay grounded despite the rather eclectic mix of films I had selected, half of which turned out to be very, very bad.

I also managed to ward off solitude thanks to my notepad, my most faithful companion during the festival. While I was accompanied for the two first screenings of the day, both of which featured titles that were enigmatic enough to elicit the interest of a friend, I was left to run around and enjoy the darkness on my own for the rest of the day. But however painful it was for me to be left alone, I found enough strength to stay and endure the many sub-par titles that flashed before my eyes only to disappear in a spark of bitter disappoint. With the last film of the day soaring high above the rest, I was in for a mostly arduous experience, especially where low budget comedies The Catechism Cataclysm and The FP were concerned. That said, the latter film was so bad as to elevate the level of Cold Sweat even before the first frame had been projected. The reason why I selected The FP in the first place was a positive review I had read in one of the English weeklies (The Mirror or The Hour), one that made it out to be more than a grueling chore to sit through by hiding its moronic nature under lighthearted epithets. Seeing how it was the only film I could cram between Frankenstein 2000 and Cold Sweat, I didn't have a choice really. And so I went in with an open mind, one that tended to close like a clam under the barrage of ineptitude to which it was subjected. 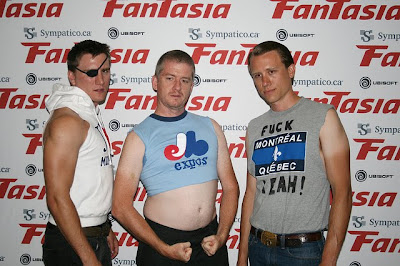 Despite limited talents as filmmakers, the
Trost Bros are impeccable showmen

Luckily for me, the makers of this film, the Trost Bros are a real pair of showmen. And while they have no clue on how to make a proper grown-up film, they sure have flair for a proper spectacle. Making the most of their visit to Canada, they were adorning shirts with a distinctive local flavor. They even challenged three crowd members to a maple syrup drinking contest! Great fun! Unfortunately, as the lights dimmed, so too did fun dim, only to reappear after the screening, when I dashed out of the crowd and reached the J.A. De Sève theater across the street where I was met with a far more diminutive crowd. As I sat down on the stairs to the library, scribbling words concise enough to convey the whole of my hatred for the previous film, I felt somewhat liberated. Now, I knew I could enjoy the next film, away from the maddening sound of idiotic laughter, into the darkness, with a few people scattered around the room, but nowhere near me. I would have ample leg space, but most of all, I would have the film to myself... What a fitting end to a grueling day, during which I had to ward off the raging desire to urinate while half of Stake Land was left to unfold, only to be forced to rush like a mad man when the credits started to roll, dash out of the theater, into the bathroom, urinate, dash out of the bathroom, run through the underground corridors toward the subway, toward the dock, dodging mounds of slow-moving people in the process, only to have to rush toward La Cinémathèque as I dashed out into yet another crowded station, Berri-UQAM. Luckily for me, Cold Sweat was good enough for me to wrap up the day quite nicely, leaving me ready for yet another 6-film marathon on the following day.

What Fun We Were Having: 4 Stories about Date Rape
Contrary to what the title would have you believe, this is not a crude, tasteless genre effort. Quite the contrary. It is deeply human, intimate portrayal of everyday people caught in the jagged gears of amorous relationships. Date rape, which is never shown in earnest, is only one of those jagged gears and the motivations for it are shown as surprisingly varied and plausible. It's a shame that Wingard can't, or won't frame anything properly. Yet, this lack in technique is compensated by the honesty of the whole enterprise and the sheer amount of beautiful girls showcased here, the most lovely of which is anti-model Hannah Hugues.


The Catechism Cataclysm
Pathetic buddy comedy relies on over-acting and televisual aesthetics to drive home a half-assed message about the power of metaphors. Starring Eastbound and Down's Steve Little, whose shoulders are certainly not strong enough to carry an entire feature film, the plot involves a lost priest on a life-affirming canoe trip with a would-be high school chum. While the protagonist is cleverly introduced as a goofball who's completely lost touch with the attendees of his Bible Study class, his antics soon go from stale to outright annoying as Little tries his hardest to reach high levels of camp, but without any proper counterbalance (as that provided by Danny McBride in the aforementioned series). Companion Robert Longstreet does provide some down-to-Earth laughs as the exasperated sidekick, but there lacks the chemistry between the two actors which was direly needed to keep the ensemble afloat. And seeing how the lackluster direction leaves the pair in charge of propelling the narrative, The Catechism Cataclysm was doomed to failure from the get-go. Luckily, the mildly interesting boxed narratives used to depict metaphorical stories narrated by the characters help keep the ensemble from sinking into oblivion, and so does that one perplexing scene involving a peculiar head-bursting noise machine. Watch with extreme caution.


Stake Land
Gorgeously photographed vampire film using the "zombie apocalypse" narrative template to critique religious fanaticism in the latter days of humanity. Film also acts as the initiation rite of a young orphan taken in by a shadowy vampire hunter known only as Mister. While the dynamic between the two is very interesting, the story twists and turns in accordance with eon-old conventions and so, very little is left to surprise battle-worn genre aficionados. What does stand out is the superb art direction involved in the creation of the numerous shanty towns through which the protagonists pass. It's actually very soothing to see that humanity might actually survive the apocalypse and find new ways to organize themselves elsewhere than in military-controlled complexes. Human life is resilient and the film perfectly captures this feature, thus upping the ante in terms of wanderers' narratives. In the end, Stake Land is a superior entry in a overcrowded sub-genre, but one that doesn't really transcend the limits thereof.


Frankenstein 2000
Hilariously bad Quebec-US co-production has a murdered scientist, and head of the R&D division of a heartless multinational, don a golden spacesuit and run around Montreal, exacting revenge against the rotten yes men who have caused his demise. The acting and screenwriting is what you would expect from such a shameless exploitation quickie and Lord's impersonal hand at the helm fails to create another dimension in which the film could find a niche. Pam Grier is all business in a late role, portraying a ruthless, and very resourceful bounty hunter hellbent on capturing the aptly nicknamed 'Frankenstein 2000'.


The FP
High-school humor and Rocky-centric puns are the bread and butter of this abysmal comedy with great cult potential amongst drunken frat boys. Read full review here.


Cold Sweat
A beacon of light in an otherwise bleak and dreary world, this Argentinian wonder is fast-paced, fetishistic and fun, with absolutely no concessions made to plausibility. A fully assumed homage to the  exploitative midnight films of yesteryears, with a long list of special thanks going to influential genre directors such as Alex de la Iglesia and Joe Dante, Cold Sweat does wonders with a limited set  and a surprisingly versatile little product called nitroglycerin. Whether it is used to provoke sudden head-bursting explosions or smeared over the naked bodies of shapely women, this shimmering substance makes for an extremely potent narrative device, useful for generating amusing gore and nail-biting suspense alike. As for the claustrophobic apartment block where the story is cramped, it is appropriately labyrinthian, with airs of past nobility befitting of the bookish reactionary antagonists roaming around menacingly. And while the film won't appeal to the average spectator, who seems more interested in some olden conception of plausibility than in the simple notion of moviegoing fun, I'm sure that like-minded genre aficionados will also consider it to be an underrated gem. Read full review here.

ENTHUSIASTIC THUMBS UP
Posted by Le cinécurieux at 9:42 PM