Despite a worn-out premise involving a gypsy curse, Drag Me to Hell manages to be refreshingly entertaining and wholly engrossing thanks to Sam Raimi's typically energetic directing and some luscious, post-Spiderman production values. While it is far from being Raimi's best film, it's a nice return to form for the director of the Evil Dead series, who delves once again in the occult in order to showcase his panache as a visual stylist and animist. But although this new outing revels in visual excess, it lacks the narrative excess and irresistible over-acting that made his earlier work a worldwide cult phenomenon. That said, the absence of Bruce Campbell is noticeable, especially with the presence of returning collaborators Scott Spiegel and Ted Raimi, who are both given bit parts. 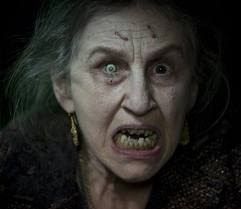 Well-crafted archetype: incidental
antagonist Sylvia Ganush
A screenplay that writes itself
In the film, Alison Lohman plays Christine, a self-seeking loan officer who yearns for a promotion in order to prove herself worthy in the eyes of her snooty stepparents. When a decrepit old gypsy comes begging for a loan extension that would allow her to retain her home, Christine is pressured into refusing despite personal politics which she ignores for the possibility of ladder-climbing. This will prove to be a deadly mistake as the old woman curses the protagonist, throwing her on the path to Hell by way of an oppressive demon called "Lamia". With three days left prior to its arrival on Earth, Christine must find a way to exorcize the demon at all costs, lest her shiny promotion and rich, caring boyfriend make way for eternal damnation.
There's not much more to the story here since the majority of plot points are dated to the point of rust, leaving technical execution squarely in charge of propelling the narrative. Originally, the film was supposed to be a remake of Jacques Tourneur's Night of the Demon, but it eventually became a slight variation thereof, with the Raimis transposing the narrative from the cobblestone streets of London to contemporary Los Angeles, where it makes even less sense. That said, every genre fan knows that a conventional premise is not necessarily an obstacle to greatness, which it certainly isn't here. 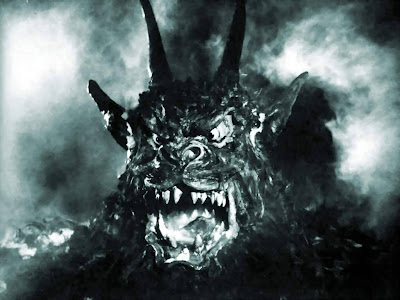 Night of the Demon with a
contemporary twist: Drag Me to Hell
Drag Me to Hell is an unpretentious, well-made popcorn film. Its shameless revisiting of tired old myths (including many returning gimmicks from Raimi's earlier films) and its crass predictability (complete with a clumsy, transparent twist ending) actually work in its favor, using common grounds to hook the viewer early on while never requiring him to make any sort of intellectual effort. Here is not a challenging film. It is not an atmospheric film either. It is a gimmick film. But it is a damn good one, thanks to the zealous crew of film fanatics at work backstage. The plot may be underwhelming, maybe even a bit racist as some critics have contended, but it's a perfect set-up for an exhilarating film experience.
A pretty decent experience in grueling terror
Watching this film, I realized that Sam Raimi is quintessentially an action film director. The hyperkinetic camerawork and frantic editing associated with his work are staples of action cinema, not horror. Moreover, the man never really manages to convey anything in the way of genuine horror, nor does he seem keen on doing so. Any sense of "grueling terror" supposedly derived from the Evil Dead films is force fed to the viewers by way of aggressive tracking shots, weird camera angles and speedy zooms. These films are not meant to depict atmospheric terror, they're meant to convey the "experience" of madness, hence the manic willpower of the camera and the outrageously obtrusive humor that permeate the ensemble. The present film is no exception as it features an incredibly zany, unforgettable confrontation between the protagonist and crusty old Sylvia Ganush, who happens to be much feistier that she appears. It also confronts us with a supernatural creature that manifests itself in violently humorous ways, causing juices to spurt widely, flies to become sentient and forcing angelic Christine to sacrifice the cutest kitten you ever saw. Fun stuff all around.
Evidently, remaining faithful to his roots also means for Raimi to showcase bodily fluids in copious amounts. And believe me, the present film doesn't skimp on fluid grossness, making the entire effort akin to an exercise in framing regurgitation. Blood, insect swarms and embalming fluids are all seen flushing out aggressively from the mouths and nose of the characters like so many bulimics' meals. For those who enjoy their meat with extra gravy on top, this is the film to see. As Raimi-esque tastes dictate, there is little in the way of traditional gore (eviscerations, beheadings, axe wounds...) for there is a humorous quality to the splatter behind which the slapstick of olden days always looms. The whimsical severed hand, fork-wielding dwarves and gulped eyeballs from the Evil Dead films find equivalents here in the inappropriate blood spurting and fly eructing that plague Christine's life, making her appear to the common person as a completely demented hag. 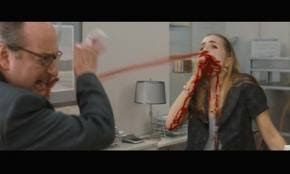 Splatter as slapstick: Christine
showers her boss with blood
Purists will surely be annoyed by the amount of CGI involved in the process, but I reckon this is now a necessary evil in horror filmmaking. Considering the amount of time and resources necessary to create disposable latex-based beasties and effects, the computer alternative becomes obvious. Besides, it works quite well here, given the briefness of most effects and their subservience to the narrative rhythm. And while it contrasts with the artisanal style of filmmaking prevalent in Raimi's earlier films, this should come as no surprise to Spiderman fans. The days of poverty are long gone for old Sam. No longer does he have to work with latex and Bolexes, turning out campy fare for midnight crowds. But although his films now share the glamorous shine of A-list pictures, they still bear his unique stamp. The sparkly clean images of today are still imbued with the madness of yesterday. No longer can fanboys see his films as readily feasible achievements, but they certainly can thank their lucky star for allowing Raimi to remain true to his roots. The man has entertainment in his blood and money can't change that.
In effect, Raimi here is revisiting his old stomping grounds with the riches of a parvenu. And while he continues to wow us with his engrossing technique, his new film lacks the unbridled creativity of his previous works, which seems to have been born out of necessity and made possible by a lack of big-studio ties. While I don't want to accuse "the system" of all the world's ailments, I reckon that their intervention in matters creative is mostly nefarious, making narrative concerns overwhelming in the face of true affect, which the film manages to turn out, but in a somewhat diluted version. 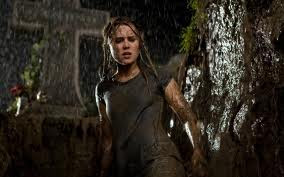 Horror film rain at the service of perverts:
Alison Lohman covered in mud
In conclusion, I would like to address that wonderful scene where Christine digs out the gypsy's corpse in order to try and put an end to the curse. Obviously, the set is quite familiar. And so is the heavy rain that showers from the skies. However, its combination with Alison Lohman's body produces quite a nice effect. I mean, what's the point of having a dude covered in water? None. As for Lohman's petite silhouette, it greatly benefits from the molding effect of the rain. This is no Where the Truth Lies here, but it's a nice touch, and it goes to prove just how dedicated and caring Raimi is in his depiction of the overdetermined situations and locations which he has to work with. After all, there is a somewhat universal quality to grave-digging scenes and I wouldn't be surprised if the mere mention thereof generated a very precise series of images in the reader's mind. But with Raimi, these images are pushed to the limit. There's literally waterfalls of mud here, a nearly sentient corpse and a greatly determined heroine, who has come a long way from her quiet cubicle in the bank, thus brilliantly mirroring the emotional progression of other Raimi-esque characters. Her newly sexualized self stands opposite to the sweet, girl-next-door looks she sported at the beginning, out of which she has grown to better subvert her film persona (seeing how she is somewhat of an ingenue). And so, just like he did for Liam Neeson in Darkman, Tobey Maguire in Spiderman, and Bruce Campbell before that, Raimi uses the harmless looks and persona of his actors to better transcend their character's personality switches. And to great effect, I might add, for madness has a way of liberating people, just like it does in Raimi's films. The director originally wanted to cast Ellen Page as Christine, which should tell you exactly the kind of petite, harmless actress he wanted to transform through this new experience in grueling terror of his.

There's a liberating feeling to all of Raimi's films, a feeling that's deeply rooted in the deliberate pacing, hyperkinetic camerawork and emotional epiphanies ingrained in his narratives. There's also a lightness to the horrific elements he showcases as humor is always a step behind, making fun the objective of his entire enterprise. There's no higher purpose here, just raw, unadulterated entertainment. Which in turn brings us back to the roots of cinema as a blue-collar, escapist form of expression. Not a higher form of art, but a derivative exercise in mob-manipulation. That is why Drag Me to Hell succeeds as an experience akin to a roller-coaster ride. A nice example of how Hollywood genre cinema need not reinvent itself, but rather exalt fun as their most salient feature.
3/5 Formulaic, but exhilarating film proves that execution trumps originality when it comes to Hollywood horror.
Posted by Le cinécurieux at 4:35 PM