Prior to watching this garden-variety Stephen King adaptation, I had heard only bad things about it. So I was surprised at first to see how lush the production was, how competent the direction, and how many talented actors were involved (including the vastly under-used Ed Harris). As expected, the action is set in a small, New-England-y coastal town where decent, hard-working folks are just waiting to have their lives ruined by a supernatural apparition. This town comes complete with relatively complex, interlocking relationships between characters that make it appear like a boiling kettle of repressed emotions. The table is thus set for the ungodly apparition of Max Von Sydow. Although disguised as a mild-mannered shopkeeper, we soon find out that he is actually the Devil, out to claim the souls of Castle Rock's inhabitants. Just as the Devil would, he uses his cunning and wisdom to cash in on the townsfolk' repressed emotions and pit them against one another until they start taking out guns and meat cleavers against their neighbors. The premise of the film is actually not bad at all but in the end, thanks to a mostly plastic-minded director, Needful Things reveals itself to be criminally ineffective and wholly forgettable.

What went wrong? The actors all try their best. J.T. Walsh is particularly memorable as a manic yacht salesman named Keeton (and nicknamed Buster) while Max Von Sydow does a decent job of creating the suave aristocrat elaborated by the constrictive screenplay. The truth is that he doesn't act as an antagonist at all, more as an elderly prankster. This fact alone defuses the story a great deal. I mean, where's the horror when demons are merely characterized by plastic nails and Victorian houses? Where's the horror when the ultimate incarnation of evil is more courteous than my grandmother? The answer is that horror is actually nowhere to be found. The whole film rather plays out like a huge prank, and despite the rising body count, still maintains its careless, juvenile attitude toward human beings all the way through. Lives are lost here, without the slightest hint of drama... as if the filmmakers themselves had made a pact with the Devil that would replace their compassion with cynicism. Even the underwhelming finale seems like a practical joke pulled by Satan's lackey. It's as if Needful Things itself had paired with its characters on the path to oblivion, for it is truly a film without a soul. 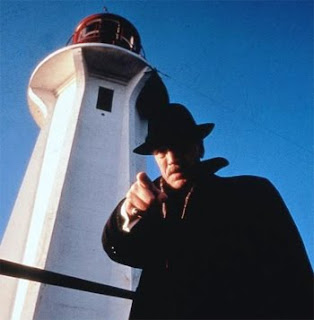 "Oh, God! What's that behind you? No, I'm serious! There's really
something behind you!" (Max von Sydow as The Millenial Prankster)


The film could've been made by a robot. It is only a mechanical addition of purely picturesque scenes meant the push the plot a little further, not unlike a broken car on a straight road which needs to go from A to B in the least amount of time. But this succession of tableaux sums up to nothing significant, just to an ending that earns its name only because it is located before the end credits. A large part of the film's runtime is dedicated to a tiresome repetition of the novel's main, lame gimmick of the poisoned, "revelatory" gift. You see, in order to convince the townsfolk to do his bidding, the Devil first has to offer them a "needful" thing, which is an item from his shop that bears some special, "emotional" significance to the person to whom it is given. Whether it is a Mickey Mantle TOPS card, a precious porcelain figure or a forgotten leather jacket, all these items generate a slew of special effects as well as a succinct, shallow flashback when they come into contact with their new proprietors. Now, these flashbacks are all needless for they neither help develop the characters nor do they help justify their subsequent actions. The whole thing is just a convenient plot device, but such an under-developed one that it doesn't even function as a critique of consumerism. It merely seems to alienate the killers/pranksters from their deeper, more intrinsic motivations toward mischief and murder. Worse is that it totally fails to convince us, the audience, that the greed for these objects might actually warrant the more hardcore pranks contained in the film. For instance, when the town bum kneels beside a pet dog and readies a switchblade for the ensuing slaughter while confessing that he will do anything to keep his "needful" leather jacket, we cannot help but be somewhat perplexed by his actions. Nothing in the screenplay can justify this sudden outburst of evil besides "magic", which is also true for most of the events seen onscreen. Following the skinning of her dog by the town bum, the lonely and reserved Netty (played by Amanda Plummer) viciously attacks the woman whom she thinks has done the deed, unaware that this woman's house was vandalized earlier by a kid who cherished a "needful" baseball card. Armed with meat cleavers and butcher's knives, the two women confront each other. "You killed my dog!" says one. "You destroyed my house!" says the other. Then they fight it off to the death. HA HA HA! Lovely prank! No characterization, no drama, no tension, just a fucking prank! That's how unconcerned the filmmakers are with their characters. Same thing when they have a twelve-year old kid shoot himself in the head (!). There is no real narrative basis for such an action but it happens. It is as inevitable as Satan's visit to Small Town, USA. And we're supposed to lap it up... The filmmakers have clearly sided with the dark lord on this one, and have produced an effort that's more of a joke than an actual horror film. A good premise, and some good money have thus been utterly wasted. And that's the real joke.

The problem here seems to stem from a misconception about what constitutes a good literary adaptation. What seems to have happened is that the filmmakers have used King's novel as a template for the actions seen onscreen, while excising all the psychological subtleties and interior monologues necessary to really situate the characters and drama within the story. What is left is a skeletal outline of a plot that's populated with nice sets, capable actors, a sharp sense for photography, but no people. No victims or villains. Only lukewarm emotions of anticipation and quiet wonder seem to emerge as strange and shocking events unfold before our eyes, but fail to make us care in any way. The only thing in the film that will probably make you squirm is the shocking lack of narrative progression when it comes to the awfulness of the deadly pranks initiated by the Devil. First, you will be confronted by teenage pranks such as throwing shit on drying sheets, and the following minute, you will see skinned dogs and hacked women. The filmmakers wanted a seamless transition between such events, but it failed to materialize. The creepiness is instantaneous, but it only creeps you out for the short period of time wherein you're wondering "What the fuck?". Then it's business as usual in the lame world of the film.

Only the most hardcore of Stephen King completists should want to watch this film. Level-headed fans will probably prefer to steer clear as the novel is certainly superior and elaborate enough to make you care for the human victims. On a positive note, I must say that the film contains one of the best cat fights of all times. No bursting breasts or sweat-soaked thighs here, but some really explosive blade action and flying furniture that will surely make your eyes glitter. Unfortunately, this scene alone isn't enough to keep the sinking boat afloat. You might actually want to fast-forward to that scene, watch it, then power off your DVD player, and watch Motel Hell instead as it comes in the same three-pack. As for buying a single copy of Needful Things, forget it. If you wanna see devils making fun of you, just turn on CNN...

2/5 An easter egg of a film: a gorgeous hollow shell.
Posted by Le cinécurieux at 3:01 PM