Before I go into more details about the general awesomeness of this poverty row masterpiece, it is imperative to set the record straight. Despite its title and premise, Monsters is not a genre film, and I believe that the absence of critical consensus stems from the fact that too many critics have analyzed it as such. Sure, there are monsters in the film, much more than many of those critics would have you believe, but overall, the film itself is not monster-centric. In other words, Monsters is not another tired tale about expendable humans running to their demise. It is rather a tale about humanity, about love, about beauty... and the beauty of monsters.

There is no critical consensus about the film, but there is one aspect, which has been universally discussed: its budget. With a price tag of about 15,000$ (less than half the cost of an SUV), Monsters seems like an otherwordly effort. Needless to say, it doesn't feature the White House being blown to bits by a huge raygun, but it still manages to craft a new world order which is entirely believable, much more so than other films of its ilk. Of course, the viewer is asked to use his imagination to fill in some gaps, but all of the important elements, such as skyscraper-high aliens, gutted buildings, huge-ass containment walls, mile-long alien tentacles, drowned fighter jets and pulsating alien pods, are all graphically depicted and shot in full view. This is no Blair Witch Project here, but a whole adventure set in a full-fledged, organic world. Director Edwards hasn't gone for the mystery-monster approach, which is fine considering that his use of offscreen space is fair at best. He shows us a lot, especially in the final scene, which could easily become a moment of anthology. So, do expect to see monsters when you walk in the theater, just don't expect over-demonstrative garbage such as Independance Day. And don't expect a stalk-and-slash, Feast-y kind of film either. What you will get instead is an inside look at the film's world from a truly human standpoint. Along with the protagonists, you will witness the many faces of a humanity in crisis, from the lofty highs of Tijuana nights to the depressing lows of juvenile deaths, sampling almost the whole gamut of human dispositions. Monsters is a self-revealing trip that you should undertake with open-mindedness, in the hopes of perhaps coming out of a better, more humane person. At least a person who can happily star-gaze while strolling in the gutter.

So, you need both open-mindedness and imagination to truly appreciate the film. Thus, I want you now to concentrate. Close your eyes and imagine a vast strip of land covering the North-American continent from coast to coast, eating a large chunk of Northern Mexico and Southern U.S.A. Now imagine this chunk of land was filled with hulking aliens walking about, infecting trees and toying with moss-covered fighter jets. These monsters can't be defeated by the army and are starting to cross the lines of defenses meant to contain them. The film begins in media res with a POV night-shot taken aboard a military truck speeding through the deserted streets of a large Mexican city. The truck is suddenly hit, and chaos ensues. You see shots of panicked soldiers firing their assault rifles intercut with shots of a towering, tentacled beast standing next to a billboard. The creature doesn't move a lot, but you can still see it in full-view. The next day, you are witness to the aftermath of this monstrous encounter: gutted buildings near collapse, army trucks zoom past and people are rushed to the hospital. Among these people is the fashionable daughter of an American media mogul on a solo trip to evade her coming wedding to some dude she doesn't care for. Sent to her rescue is a freelance photographer working for one of the father's tabloids. At first unwilling, he finally accepts to escort her back to the States. And there begins their journey across Mexico, and eventually across 'the infected zone', during which they will become enamored with each other. 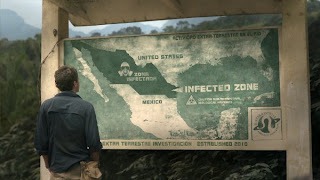 Artistic economy: you don't need a huge mothership when
your audience is willing to suspend its disbelief

As with any fiction film, you will have to suspend your disbelief and accept the film's reality as it is. Considering the film's budget, you might have to do an extra effort and elude stupid questions such as "Why aren't there more monsters?" or "If the monsters are so big, why isn't the horizon within the infected zone filled with them?". Suspend your disbelief, my friends! Accept the very first law of fiction filmmaking: what you see in front of you isn't real, but you have to act as if it is. Then only can you accept a big-budget film idea executed with the least of means. Then only can you accept the idea of a country-wide infected zone on the basis of some billboards and graffitis depicting monsters, gaz masks and pulsating pods. There is a famous filmmaking motto that goes: "Five people's a crowd", meaning that, if framed correctly, five people can appear to be part of a ten-thousand people crowd. In this case, "Five monsters is an invasion". Gareth Edwards' paramount achievement is precisely doing so much with so little, delimitating 'the zone' on a map and fencing it with CGI walls to create it out of thin air, using a battered building or some rubble to simulate the path of destruction left by a monster, using one tank to suggest an entire platoon or using one promotional poster for 2-for-1 gaz masks to set the story. No excess here. No money squandered on lazy spectators who do not even want to use their imagination. But what's more important is that by tweeking the landscape so lightly, the film still takes full advantage of all local decors. Thus, despite an outlandish premise, every locale still manages to keep its authenticity. In one particular instance, real life drama beautifully interplays with the onscreen drama. There is a cemetary within the remains of a felled building, a cemetary for the victims of a monster attack. Within are people congregating around the graves, crying their dead. A bird eye's view shot of the cemetary shows us its humbling immensity. But this is no set. This is a real cemetary, with real people, living a real drama. In that one instant, we immediately feel for these characters, and thus simultaneously for the real people involved in the situation. Both the real and simulated mourning of the people before us becomes poignant. Human drama is at an height, catalyzed if you will, by a common menace that could suddenly unite the Mexicans and Americans. Drama born out of thin air. Magic. The magic of film, back on the screen. 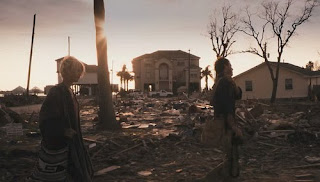 Refreshingly enough, Monsters is a very humanistic film that cares for its characters, which is fine considering how sudden doom often compromises exposition in such films. Here, there are only two protagonists and their evolution is not tragically cut short by their demise. Also, there are no flat, one-liner-spewing bit players to litter the scenery with corpses, nor is there a tiresome comic relief. Again, no waste. No ink squandered to pen life into expendable cannon fodder or obligatory characters. In fact, every character, or group of characters in the film has a purpose, to each reveal an aspect of humanity and help the protagonists grow and understand Earth as the crossroad of many worlds. Monsterscould thus be more aptly described as a road movie in which the travelers amass wisdom like moss on a rock, wisdom disseminated all around, in the dialogue with others as well as in the understanding contemplation of our common fate. And when the protagonists take time to observe it, even the monstrous 'menace' reveals itself as something entirely more beautiful and intriguing than what it first appears to be. Likewise, all Others appear threatening until we decide to try and understand them. The truth is that, whether from North of South of the Border, whether from down here or up there, we all have to share this humble earth. Insofar as life here goes, extra-terrestrials may just as well be our brothers and sisters. Like the two protagonists, who are alien to each other at first, but slowly fall in love, we too come to fall in love with the creatures.

Finally, a few words on acting. As far as it goes, the film rests almost solely on the shoulders of the two leads who do a decent jobs of creating not archetypes, but average types. They are helped a great deal by a strong script which is nicely paced, intelligent and full of tasty lines that perfectly flesh them out. Near the end, it does get a bit lazier, but then it is entirely redeemed by the visuals. What's truly amazing in the acting department is the almost seamless acting of non-professional locals scattered through the film's world. These "authentic" people grant the film its authenticity inasmuch as the locales contribute to the overall social realism of the film, they interpenetrate and thus create greater meaning.

As it stands, Monsters is a film that actually benefits a lot from its diminutive budget. Not only does it generate a rare form of social realism, forced if you will, by location shooting, but it also prevents any narrative excess. The film is a lean, mean machine. It does its thing without squandering anything in the process, nor without conceding any of those "greater" ideas which it is full of. It contains an uncompromising, and uncompromisingly beautiful vision realized with almost no waste at all. There are not too many characters, natural sets, natural lighting, non-professional actors and lots of suggestions and despite all this, all the A-list film ideas contained within are all fully realized. Gareth Edwards gives us a great present with this film, but he also asks us something in return: to participate in the adventure by creating in our minds what he couldn't onscreen. And let me tell you: the audience's imagination can go a long way, not only for this particular film, but in all things fantasy. If movie audiences in North America weren't so lazy and unimaginative, Hollywood could turn out major fantasy films at 25,000$ apiece and thus create a truly competitive film market, and not remain the un-American oligarchy that it is today. What's more is that we wouldn't have to suffer any more super-boring, overwritten Batman films, nor would we have to marvel at two-hour long TV episodes such as the last two Bourne films. People wouldn't wet themselves at the thought of a new Tolkien, Rowling or Meyer adaptation and films like spendocrat James Cameron's Avatar would be recognized for what they truly are: bourgeois efforts in unneccessary filmmaking.


***1/2  One of the greatest achievements in contemporary genre filmmaking.

Footnote 02/14: Removed half a star from the rating. I mean, 4 stars for what is essentially a sappy romance between two idiots? Got carried away again...
Posted by Le cinécurieux at 9:36 AM