Here it is, ladies and gentlemen: the best zombie film of all times! "Night" had laid the groundwork ten years before, but it is only with "Dawn" that Romero fully fleshes the genre (no pun intended). A group of four people (two cops, and a couple of newspeople) "run" from zombie-overrun Phillie and find shelter in a suburban mall, which they clean and wall-up as their own personal fortress. They would've been happy there, if it weren't for a ruthless gang of bikers (that includes FX maestro Tom Savini) who forces them into an all-out war. With gripping realism, the film opens in media res during the media shitstorm provoked by the rise of the dead. A talk-show featuring a guest hellbent on raising you-should-shoot-any-dead-family-member-in-the-head awareness is disturbed when protagonist Francine fights an executive over the broadcast of outdated "shelter" information. On the other side of town, protagonists Roger and Peter (fan-favorite Ken Foree who would go on to appear in dozens more genre films, including "From Beyond", "The Devil's Reject" and the "Dawn of the Dead" remake) are involved in a mission to evacuate a low-income housing project, with a trigger-happy racist at their sides, into a mazelike contraption full of the living dead. Concisely enough, the main characters are all introduced within their element, and with them, the chaotic world in which they have learned to live. The action, so to speak, begins soon after, as Roger, Peter, Francine and her boyfriend Stephen ("Fly Boy") copter their way out of the city and into the suburb. Over the countryside, they spot a party of redneck militians enjoying thermos coffee and target practice. Those guys remind us of "Night"s conclusion, but this time around, they're part of a bigger whole. You see, by covering the entire stretch of land inbetween the big city and the suburb, Romero ups the ante in terms of scale (and effect) as world contamination becomes a tangible perspective. Almost overnight, the entire human experience has become a thing of unfathomable horror. 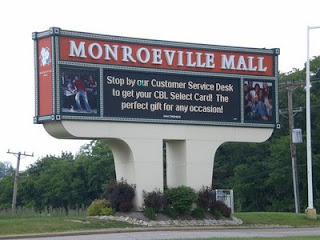 Interestingly enough, the shopping mall thus becomes a hot destination. As the world crumbles, it remains the only shelter against the harsh reality of things, a sanctuary so to speak, from the evils of the world. It is made of bricks and steel, sure, but mostly of dreams and illusions. It is a promise of individual comfort in a world of death and destruction. The zombies frequent it, their motor reflexes dragging them back in, but so do the protagonists. In the end, they even confine themselves to its bowels, and within, a cozy apartment furnished "à la mode" where they eat delicacies and drink liquor, oblivious to the faith of other survivors. They are living the American dream, despite the dreary fact that there is no America to speak of anymore. Nonetheless, there are shades of America: consumerism, individualism, and most of all, the a rigid social stratification. You see, "Dawn" also functions as a social commentary. First, by suggesting that the desire to survive is inherently individualistic. Unlike "Night", "Land", "Survival" and most other zombie films, "Dawn" focuses not on a rag-tag collection of survivors picked along the way, but on one restricted, homogenized group that will defend its own interests against others. The paradigm is no longer "us against them" in the sense of humans against zombies, but "us", a small group of friends, against "them", the rest of the world. Many commentators even argue that the different social actors in the film are related hierarchically. Roger Avary suggests the protagonists represent the upper class (locked away in a "gated community"), while the zombies are the lower class (pushed away from that community). As a working hypothesis, it could be useful, but that's by disregarding the fact that the zombies herein are instinctively drawn to the mall. That is, they represent the growing middle class, drawn to the malls by a motorized desire to consume, which in turns constitutes their raison-d'être. The zombie is a mindless consumer, and vice-versa. In the end, the mall setting offers many narrative possibilities, yet its relevance lies in enabling the critique of consumerism that the multiplication of zombie (consumers) allows.

Finally, a few comments about the score and gore because it would be a crime to mention this film's importance without mentioning the dream team that surrounded Romero at the time. Fresh from their crucial contribution to the classic "Suspiria", Italian noise machine The Goblins (featuring the great Dario Argento) cross the Atlantic for a great cause indeed. Their warped, keyboard-heavy score, is trippy and exhilarating, making the celluloid pulsate to the beat. Most of all, it is quite unique. As if the stars had perfectly aligned so we could hear this. Then, there is Tom Savini, for whom the film constitutes a breakthrough. Deservingly so, because the bits of gore contained in the film (concentrated mostly at the beginning and end) are all disturbingly realistic. Zombie teeth break human flesh in loving close-ups, characters are eviscerated, machetes are plunged in zombie heads, all of this as extra butter on a delicious croissant. All in all, "Dawn of the Dead" is Romero's best film because it happens at such a great time for exploitation cinema. The rise of consumerism, and the multiplication of shopping malls provided the sociological framework of the film, the green-light on violence made the zombie film all the more viable, plus Romero benefited from a bigger budget (due to previous film successes), and from the contribution of Dario Argento, The Goblins, and Tom Savini, all at the peek of their careers. Statistically and historically, there is almost no chance of such a happy coincidence reccuring in horror cinema. Let us weep then, and watch "Dawn" yet another time!