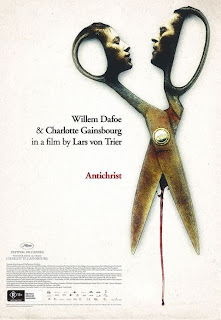 First of all, let's call things what they are. A severed clitoris is a severed clitoris, and Lars von Trier's new film is a horror film. Let us not be so afraid of genre cinema, people! Even if a famous director does it, it still is what it is, especially when it draws so much from the very themes that are (were) central to the genre. Equating femininity with nature, nature with Satan, and Satan with femininity is not new. People have made that association for the most part of Christian history. And believe me, it isn't brilliant just because it is von Trier doing it. It is fucking retarded. Yet, despite everything, despite the misogyny central to his work, von Trier is not a bad director. Not bad at all, in fact. The photography, the acting in "Antichrist" are superior to anything you've seen recently, or will see for a while. Poor Charlotte Gainsbourg even won an award in Cannes for her complex, humbling performance as The Monstrous Female. It's just too bad she had to do what she did to earn that prize... "Antichrist" is the story of He (Willem Dafoe), a somewhat ill-advised psycho-therapist, and She (Gainsbourg), a psychotic female, both of which were fucking in slow-motion when their son took a deadly dive from the apartment window. When their son died however, only one of them cared. She. Despite the fact that she used to torture the kid by inverting the sides of his shoes. Nonetheless, it's her who has to seek psychiatric help in the person of... He. And so the story begins, with the death of a child some He must make sense of by psycho-analyzing a She that has gone bonkers. Simplistic in the extreme, the film gets points for framing nature as it does, making it opressive and monstrous. It also gets points for having guts, and showing the audience what it shudders about: agressive sex initiated by the female party. Nonetheless, despite the savvy use of natural settings, the recontextualisation of the witch character, and the gutsy showcasing of X-Rated sexuality, the film is little more than a misogynist attempt at mythologyzing female sexuality. Sorry Lars, but you had that review coming.