I wrote a capsule review for this film during the 2011 edition of Fantasia, but after picking up a DVD copy in a bargain bin, I decided to write something more substantial on the topic. The film was given such an enthusiastic review by the programmers at the festival that I felt the need to revisit its darkly mundane universe in order to find the elusive brilliance I had missed the first time around. Same as before, I found that Absentia was a clever film with great ambitions, but a lack of means to achieve those ambitions. Its reliance on mundane events to generate affect amongst spectators actually impairs its departure into the realm of fantasy, especially near the end, when the screenplay overreaches itself by trying to explain every single disappearance since the beginning of time. 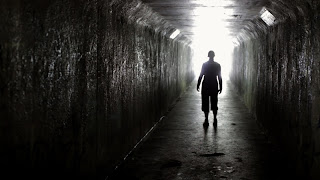 Absentia is an ambitious film, but it fails to
really deliver on its intriguing premise.

The narrative of the film focuses on a pair of sisters, pregnant Tricia, whose husband Daniel has now been missing for seven years, and Callie, a recovering drug addict who is just reuniting with her estranged sister in L.A., near the mysterious tunnel where Daniel vanished all those years ago. While in the process of declaring her husband “dead in absentia”, Tricia starts being plagued by the usual apparitions of black-eyed ghosts shrieking at the screen. She feels guilty, you see, for having gotten knocked up by the police detective assigned to Daniel’s case.  After much trial and tribulation, during which the visions become increasingly frequent and Callie starts witnessing weird goings-on in the tunnel, Daniel suddenly returns. But he is in bad shape, exhibiting marks of violence all over his body and suffering from a serious case of sun depravation. Seemingly unwilling to reveal the exact conditions in which he has lived for the past seven years, Daniel is pushed to confess, just before disappearing once more for good. And as Callie starts investigating, we find that his disappearance was one of many, and that they all pertain to mythical insect creatures living just beyond the veil of our dimension. So, be ready to suspend your disbelief.

Everything in the film, from the nearly TV-level aesthetics to the lowbrow script, even the cyclical nature of the narrative and the sheer ugliness of the locales are meant to create a certain sense of familiarity, one could say “proximity” to the material onscreen. The focus put on the paperwork necessary to obtain the death certificate is another means to achieve this goal, and so are the incredibly mundane dialogues, delivered sometimes awkwardly, by a willing cast of no-namers. All of this contributes to create a really earnest drama that involves the spectator right away. The opening sequence is quite powerful in that regard. It shows protagonist Tricia walking through her neighborhood, removing withered missing person posters and stapling new ones on various telephone posts. She does so in a mechanical, resigned way that nicely sums up her current situation and the angst building up inside her. Time has obviously taken a toll on her, same as on the posters, who have long braved the elements, but to no avail. The whole ordeal of having a death certificate issued for a person in absentia also helps make her ordeal appear intelligible to us, who have all had to deal with paperwork in one way or another. That said, the legally-determined time lapse of seven years necessary to declare a person “dead in absentia”, hence allowing relatives to sever painful ties with the deceased, might appear perfectly sound from a bureaucratic standpoint , but they must be excruciating for anybody living in doubt as to their relative’s whereabouts. Thus, horror remains in the mundane reality of bureaucracy, as it is in the guilt of “betraying” a lost husband with another man. But horror also comes from without, and that is perhaps where the film starts to falter. 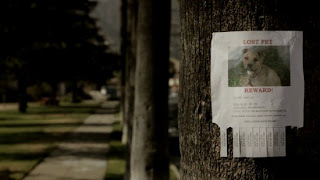 Mundane imagery is a perfect gateway
into the world of the film.

You see, when Daniel reappears, looking pale as a ghost, malnourished and wearing the very same clothes he wore the day of his disappearance, we obviously suspect supernatural intervention. And at this point, the mystery remains tantalizing. Who, or what could’ve bruised the man to such an extent? Who, or what would’ve wanted to keep him alive for nearly a decade without stealing any of his money? Maybe we could’ve shared some of Daniel’s memories at this point, but the film prefers engaging in iffy, mythological speculation. Despite an embryonic explanation provided by Daniel as to the shape of his tormentors, we are soon deprived of his hands-on memories when he is kidnapped once more under Callie’s glassy eyes. Wrought with guilt for having lost Tricia’s husband to an ill-defined insect beast, she conducts a hardy Google investigation*, and comes up with some certitudes that immediately deflate any attempt at closing the film with an open ending. In a particularly half-assed segway into the mythological aspects of the film, the young woman uses high school science and the momentary gullibility of the curious spectator to tell us how nothing on the planet can be totally solid, hence impregnable. This opens up the ill-defined idea of a contiguous dimension existing at the threshold of our own, a hidden dimension home to mythological snatchers of people. The idea is quite horrific in itself, but it is less so than the mystery that preceded. And so, the politic of intelligibility for all turns out to be a trump card for we are soon asked to suspend our disbelief in a big way.

All through the film, mystery is the name of the game, with Tricia’s angst stemming directly from her lack of information regarding the disappearance of her husband. One of the most intriguing plot devices in the film actually concerns that very lack of information and the stretch of imagination necessary to fill in the gaps. When asked for a tentative explanation as to her husband’s disappearance, Tricia suggests a number of scenarios, each one complemented by a short series of images. Hence, we get to see Daniel as a government operative keeping a watchful eye on his former home, or an amnesic with a new family and a new life. These images are pure forgery, of course, but they perfectly delineate the reality of “loss” victims, forced to make sense of their loved one’s disappearance with any sort of fantastic story. When Daniel finally comes back to our side of reality, popping up on the front lawn as Tricia and her new boyfriend are going out to celebrate their newly recognized union, we are dumbstruck. The poor man is pale and weak, crumbling down on the pavement even before he could reach the adulterous couple. When we later discover bruises all over his body and chicken bones inside his stomach, we can only struggle to explain them, unsure as to our actual desire to learn the truth. At this point, the multi-scenario device would’ve worked better to procure a tentative explanation rather than an all-encompassing one, thus allowing our imagination to fill in the gaps left by Daniel’s own partial understanding of his ordeal. 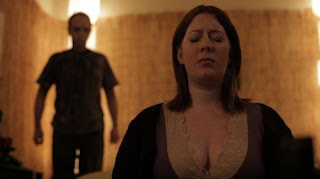 In the end, Absentia works better as an earnest character study than as a true horror film. The supernatural elements contained within are neither embodied enough to create any sort of spectacle, nor mysterious enough to cultivate ambiguity. They are left in a sort of expressive limbo that impairs the whole efficiency of the narrative, the most interesting aspect thereof being the human factor and its relationship to loss. With the crux of dramatic power lying in Tricia’s guilt and the ability to cope with loss, the “monstrous” aspects of the screenplay seem to have been merely an afterthought. And while they provides a powerful ending, they also completely mar our sense of wonder and excitement as to the aura of mystery permeating the film.

2,5/5   A very intriguing, but poorly produced film that turns out to be more interesting in its depiction of mundane angst, than as a true monster film.

* Remember the days where characters would learn stuff by visiting their local library and getting involved in upbeat montages? Some films still privilege that olden approach, such as that wonderful British offering The Pact, but most films today take the “Wikipedia” approach to knowledge, that is the fastest way around the block, and not the scenic route…Here, Callie builds an entire dossier, including newspaper clippings, from random web resources. 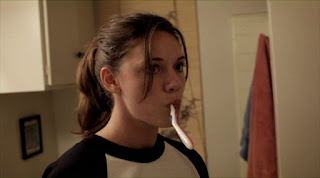 Callie looks great, but she hardly makes a convincing
argument for the existence of insectoid kidnappers.
Posted by Le cinécurieux at 3:49 PM