Uninspired title, uninspired film; The Burning is a formulaic vehicle for Tom Savini's stellar FX and a slippery stepping stone for a plethora of future stars, including Seinfeld's Jason Alexander and Hollywood mogul Harvey Weinstein. Throughout the years, the film has managed to garner a mostly undeserved reputation as one of the strongest "summer camp" slashers of the early 80s, which is at best a dubious honor. Truth of the matter is, there's nothing so novel or unique here as to really stimulate the viewer, especially after ample servings of similar outings, the bulk of which thread water in a sea of moronic jump scenes and awkward teenage coupling. And at heart, The Burning is no exception, being narrowly salvaged by uncut gore scenes and the mild historical interest provided by the presence of many stars to be. 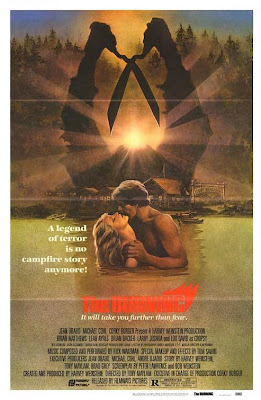 The tacky cover should tell you
precisely what's in store
A trip down Memory Lane
I remember seeing The Burning about a decade ago, during one of the horror film marathons I used to organize with a like-minded friend. We would go to La Boîte Noire (Montreal's finest home video outlet) and pick four films which appealed to our immediate desires, then dash home and indulge in the giddy thrills of our earlier years. Virtually every sub-genre and every era we covered, from classic monster movies to contemporary gore jobs and everything in between, imposing as few limits on ourselves as possible. 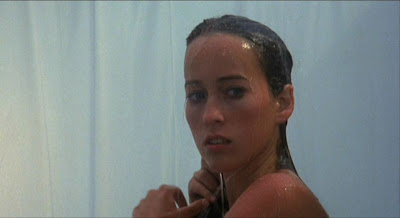 The obligatory shower scene is located way too
early to create any real sense of foreboding
At face value, the product didn't seem interesting, evoking rather boredom from redundancy than entertainment. But then, there were those immense shears, and all the different kinds of violence they could implement. The possibilities seemed endless at the time. And seeing how we weren't concerned by the promise of nudity, having outgrown our girly magazine phase, the promise of latex arteries being slashed open and rubber bodies getting penetrated by blades, all the cutting, impaling, stabbing, sawing that these weapons implied, this is what appealed to our fiendish, infantile desires.

Art and giblets
You see, there is a craft to creating realistic gore effects, a craft just as imaginative and brain-wracking as set design, and which is something that horror fans enjoy even more. Yet, it is almost universally frowned upon as something vulgar and unworthy of praise. Not unlike color photography when it first came about, and was denied any artistic potential by retrograde wise men who stroked their beard and looked at the past for inspiration. Clearly, there's a double standard at play here, and it is mostly informed by popular tastes in matters moralistic. Hence, when a master painter depicts the human body with precise accuracy, he is called great. When a cartoonist draws the face of his subject in vivid details, witnesses are in awe of his art. But when one slices the body open, even though that body is a meticulously duplicated figure, then high-strung sensibilities immediately come into play and start interfering with the appreciation of art. People will suddenly become hostile to the craftsman, whose work proves too close for comfort, an uneasy reminder of what the human form, in all its perceived glory, veils in terms of glistening viscera and dripping arteries. 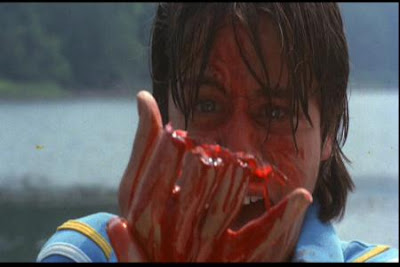 The Burning is a masterpiece of gory art. Here, a young
Fisher Stevens learns of the slasher's wrath firsthand.
And that's only one of the two major downsides of creating gore FX, the other being the lack of exposition that this form of art has within the medium that is horror. Guys get to see their work onscreen for scant seconds. They spend hours designing and crafting body parts that leak in the proper way, or splatter according to script, all of that for less than three minutes of screentime in a 90-minutes film chock-full of untold filler, scenes of teenagers wandering through the forest, cheap scares, and cheap tits, usually borrowed from young actresses in need of work. But there is a reward in all this: the fact that people come to see the film precisely for those three minutes. And for the three minutes of nudity. The plot around it all is just filler, and it runs in circles, precisely not to alienate audience members, hooking them with the comforting knowledge of forecoming gore or nudity at every predictable turn.

People don't go see slashers because they enjoy the victimization of women, nor because they must comply with murderous instincts. They do so only to appreciate flesh in the most visceral, but ultimately most forbidden fashion. Just think of a roller coaster. Whether you dress it up like a dragon, a train, or a spaceship, it's appreciation will vary only in accordance with the amount of thrills that it provides. It would be naive to think that people see themselves soaring into outer space after being strapped into the Magic Mountain ride. Just like it is naive to think that people play out psychological angst while watching horror films. Horror films are mostly meant to make you react to a rapid series of stimuli, to engage you in the thrills of sexual awakening and/or murderous rage, making you probe just beyond the veil of flesh and into a world that is so real as to endanger the fragile balance of lies that constitute modern life and the comforting thought that we are somehow more than just flesh and blood.


The Scalding
Nostalgic digressions aside, The Burning constitutes a typical example of "summer camp" slashers. The formulaic storyline is punctuated by a series of twists that could be arranged in virtually any order, seeing how the characters barely evolve through the course of the narrative, except when their deaths bring about some mild emotions from their peers. Yet, there is some great gore effects to marvel at... and wait for endlessly. There is some full frontal (female) nudity. But nothing to write mom about. Moreover, the film makes quite a narrative blunder that greatly threatens the fun that one could derive from it. The fact that the killer is clearly identified from the beginning makes it impossible for the viewer to engage in any form of speculation, leaving us only to wonder why he goes on a killing spree without targeting the one character most directly responsible for his accident. What we are left with is only gore and tits, basically. 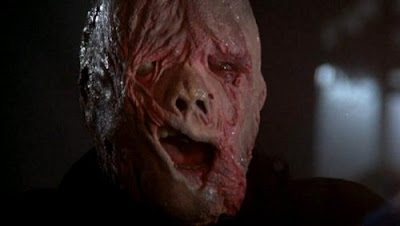 The identity of the killer is revealed
way too early for us to indulge in speculation
For those who care, the story involves an abusive caretaker who was inadvertently set afire when a group of disgruntled campers pulled a nasty prank on him several years back and left him for dead in the woods. Now, instead of fast-forwarding to the same camp in the present day, the film follows the caretaker as he is committed to the burn ward of a big city hospital (shot in near total darkness), then released after a painful recovery. Upon being let loose in the city, he quickly picks up a hooker and stabs her with a pair of scissors, establishing from the get-go that it is he, the shear-wielding slasher. Then, it's all a question of who goes first when the film cuts to the summer camp where Tommy, one of the murderous pranksters from the opening scene, now works as a counselor. With a cast of characters only slightly rounder than archetypes, whatever happens next in terms of exposition is not nearly as interesting as the minute details of the teenagers' foretold deaths.

For those who can appreciate it, I must say that the film is deliciously retro in its musical selection, respectfully paying homage to the gialli, the original slasher films, with its high-pitched, almost contrapuntal use of keyboard sounds. But most importantly, the film is of some historical interest because it contains the work of several future celebrities. Oscar winners Fisher Stevens, Holly Hunter and Harvey Weinstein all used the film as a springboard in their trip toward excellence. And so did Jason Alexander, known worldwide as Seinfeld's George Costanza. And while they are not at their best here, at least they were given that early chance to shine. Which is all the more reason to support cheaply-produced, widely-distributed exploiters, nay, to demand the return of cheaply-produced, widely-distributed exploiters as part of a business strategy to rejuvenate the Hollywoodian machine.

Becsause despite what the detractors of these films will say, these is art to be found in them, and beauty. For the craft of dismemberment is also a celebration of art, and of humanity in its depiction of the most fragile, most prosaic elements of our existence, the soft flesh and the flowing blood which makes us what we are. Then there is the sculptural beauty of teenage Venuses. The spectacle of youth, unveiled by flashy, branded garments. The spectacle of youth in its intrinsic beauty, not in the manufactured beauty of products. But most importantly, the showcasing of humanity in its simplest form, away from the overly intellectualized dramatic humanity of meta-narratives. Hence, the constant reminder of death which characterizes the horror genre, and which finds its expression in the vulnerability of our Earthly beings of flesh and guts, driven not by higher ideals, but by pressing instincts. The celebration of human as animal, and not as a Godly creature, which is at once the genre's driving force and the origin of criticism against it.


Why I digress
Why I digress is obvious. It is because there is so very little to say about The Burning, except to invite readers to look at the tag fastened around it: "A Harvey Weinstein production of a Tony Maylam summer camp slasher starring Jason Alexander, Fisher Stevens and Holly Hunter, with makeup and gore effects by Tom Savini". Given the rigid codes to which this kind of films obeys, you should get a fairly precise idea of what to expect merely from that description. And if you're looking for something more, well, you're not gonna find it. The film is fun for the shears, and for the spectacle of Jason Alexander with hair all the way to his forehead. That's it.


2/5 A fairly standard summer camp gore job with some historical interest deriving for the presence of many stars to be.
Posted by Le cinécurieux at 3:12 PM