Titular qualifier makes you forget about classic zombie narratives for a spell, but the subterfuge doesn't last long...


Mutants starts out as more than a vulgar zombie film, but the conventions of the genre eventually catch up to it and the entire enterprise sinks into the familiar depths of banality. It's a shame to see the light of originality, rare as it is when the living dead is concerned, flicker and die to accomodate the needs of today's hyperactive audiences. But then again, it comes as no surprise to jaded genre fans.

The film starts out as a love story, a bittersweet, surprisingly involving love story. Usually, in the zombie narrative, the protagonist's loved ones are always the first to bite the big one. Here, it takes quite some time before the family unit starts to disintegrate, the time of a Cronenbergian transmutation during which the dramatic crux of the film unfolds. 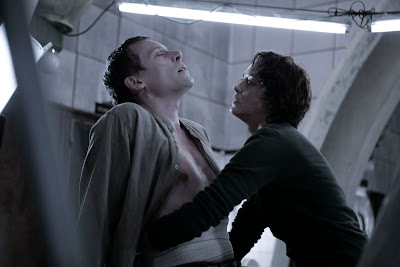 Sonia and Marco: a couple on the verge of a viral breakdown

The film begins with a couple of paramedics fleeing aboard a bloodied ambulance, led by a trigger-happy female soldier who promises to guide them to a fabled safe zone held by the military. After she dies during an exchange of gunfire with potentially infected locals, and the ambulance runs out of gas, the couple seeks refuge in an abandoned hospital within the woods, where the female protagonist tries to treat her infected boyfriend to the best of her abilities. However, it soon becomes obvious that the zombification process is irreversible and incurable.

As the victim starts getting worse, shedding body parts and puking copious amounts of blood, so does the couple's relationship start deteriorating into a pathetic showcase of extreme interdependency. While this lasts, the viewer remains on edge, contemplating how the zombie apocalypse could actually affect their lives as an emotional hardship and not simply a privation of commodities. The arduous transmutation process, during which her boyfriend becomes increasingly erratic and aggressive leaves the protagonist in a nightmarish limbo wherein she contemplates solitude as a painful liberation from the dreadful new realities of the flesh. Seeing how this ordeal is a dramatic high point, the film soon has no other way to go but down.

After the boyfriend completes his metamorphosis, he is replaced in the narrative by a slew of unsympathetic bit players whose presence feels hopelessly contrived. The following chain of events is a simple collection of obligatory fight scenes filmed with an hyper-kinetic style that greatly contrasts with the contemplative style used in the first part. Of these two parts, one will surely prefer the slower, more original and involving first half to the formulaic, confusing second half. Shades of 28 Weeks Later obscure the illuminating opening act and the resulting discrepancy makes for a flawed film with just enough dramatic weight to make a lukewarm recommendation. As for the mystery surrounding the existence of a hidden military safe zone, it is resolved flatly during the conclusion, leaving the viewer unfulfilled and wanting to go back to the beginning in order to start over again. 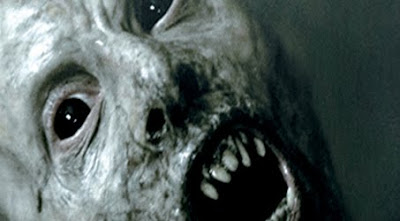 An interesting design does not necessarily warrant the overwhelming
presence of mutants in the second half of the film. A zombieless
zombie film would've been more interesting.

All in all, while the monster design is good and some of the extra characters possess intriguing qualities, Mutants is ultimately a self-defeating, badly dosed effort in crowd-pleasing, which is narrowly saved by an engrossing first half. Let us just hope that director Morlet gets his game back for further films and eventually manages to follow the route of originality all the way to the end.

2,5/5 An enjoyable love story is marred by hyperactive action scenes that almost seem out of place considering the buildup that led one to them.

Posted by Le cinécurieux at 4:30 PM